The Northern Lights in Canada, also referred to as the Aurora Borealis, is a much celebrated annual tradition of dancing skies over the tundra and boreal forests of Northern Canada. The much photographed and visited Aurora Borealis is a natural phenomenon attracting travelers to the northern regions of Canada every year in anticipation of catching a glimpse of these dancing lights which illuminate the northern skies in an array of rainbow colors. 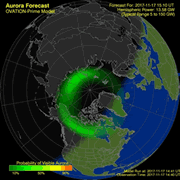 Best Time to View the Northern Lights in Canada

The Aurora Borealis is viewed on many nights of the year in some of Canada's north. However, when the nights get longer, and the temperatures drop in Northern Canada, the chances of the lights making an appearance are best between October and March. The Northern Lights do not shine in southern Canada due to the warmer temperatures, and light pollution.

How Do the Northern Lights Work

The amazing rainbow colors of the Northern Lights shines in greens, yellows, blues or reds. The light show is a result of a chemical reaction between the sun and our atmosphere. The sun beams down electromagnetic radiation. The beams of light interact with the gases in the earth's atmosphere. The end result are the dancing lights we call the Aurora Borealis.

Throughout the northern regions of our Canadian provinces and all of our territories are wilderness lodges, backcountry resorts and nature cottages. Because of the dancing lights there are some accommodations which provide northern light tours and guides. Many of these winter accommodations also provide adventure activities like snowmobiling, xc skiing, snowshoeing and dog sledding.

- research lodges and resorts for Northern Light packages.
- bring liquids and snacks.
- in the north dress in layers as weather can be unpredictable.
- view lights away from urban areas. The darker the better.
- check the local weather forecasts for clear skies for best viewing.
- pack a video and camera.
- to take a picture set your digital camera with an ISO setting of 1600.
- arrive early as lights can last for a few minutes or hours.