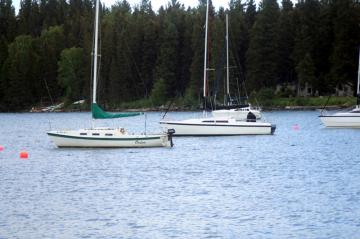 Clayoquot Sound is a wilderness remote marine destination off the west coast of Vancouver Island, British Columbia, Canada north of the Village of Tofino, BC, Canada. The sound is best known for its old growth trees, islands and wildlife sightings.

Clayoquot Sound is well known on the west coast, and around the world, as the site of one of the worlds most famous environmental protests. People gathered from all around the country to protect the old growth forests, some of the last of its kind in the world, from being logged.

The geography of Clayoquot Sound creates two marine travel routes. One an inner passage and the other an outer passage. The inner passage explores behind Meares and Flores Island. It is a sheltered route with calmer tides and friendlier weather conditions. The outer passage is exposed to the winds and tidal currents of the Pacific Ocean which can can get rough and unpredictable.

The complete route is a circle tour - inner and outer passage together. The route includes some highlights like Coyote Cove, Hoo-la-Kootla, Ahousat, Dolphin Cove, Gods Pocket and Whitepine Cove.

All boaters should have current navigation charts and good marine equipment. Weather conditions in the shoulder seasons include heavy winds, high surf, deep swells, changing currents and dense fog. The peak season of May to August is best for boating in Clayoquot Sound.