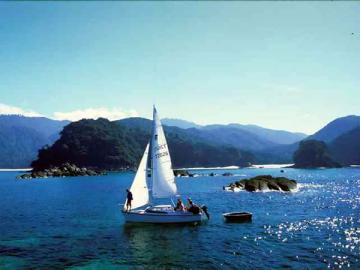 The Johnstone Strait marine route is located along the inside passage of Vancouver Island, BC, Canada. It is a major marine transportation route between the island the mainland of British Columbia for sailboats, freighters, kayaks, tour companies, Coast Guard vessels, tug boats, cruise liners, BC Ferries and fishing boats.

For the leisure marine craft on the water some of the highlights include the Gulf Islands, the Tsitika River Estuary Watershed, Orcas in Robson Bight and Blackfish Sound and the Mamalilaculla First Nations Totem Poles.

All who navigate the strait need to be prepared. Not only is the marine traffic intense at times but there are natural elments to preapre for like currents,  tide rips, heavy winds, changing weather conditions, and reefs.  It always wise to wear your life jacket on the water, as well as, equip yourself with a gps, tidal charts, rain gear and navigation charts.

Wildlife sightings in Johnstone Strait are common. Some of the wildlife to watch for includes black bears, seals, sea lions and whales. In Johnstone Strait, especially in the areas of Robson Bight and Blackfish Sound, are some of the biggest concentrations of Orcas (Killer Whales).

Aside from what we already have mentioned some of the other destinations to chart include Blackney Passage, Telegraph Cove, Beaver Cove, Broughton Strait, Cormorant Island, Malcolm Island, Hanson Island and Hambledown Island.