Day One of a cross Canada trip 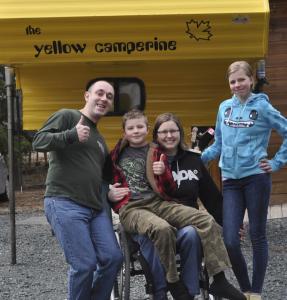 The following is a modified version of my blog written during our trip across Canada, spring 2014.

One day into our cross Canada trip and having put in a dozen hours of hard driving we have made a significant, relatively small, step to the east of or starting point in Prince George. It is a testament to what a very special, unique country Canada is, that the Rocky Mountains, one of the worlds best outdoor playgrounds, a place of incredible natural beauty with breathtaking scenery everywhere you look and a place that people travel thousands of miles to see, is in our case, a mere footnote to the rest of our trip. In fact we have flown through the area and in just one day have really seen what amazing variety western Canada has to offer. We have left the spruce and pine forests, passed through the massive ancient cedars of one of the worlds only inland temperate rain forests, climbed up and then down one of the worlds foremost mountain ranges, and emerged onto lush prairies before finding ourselves in a landscape, around Drumheller AB, that would not look out of place in a post apocalyptic zombie movie (I'm talking purely about the stark landscape and not insinuating that Albertans are in anyway zombie like). Of course it all sounds much easier in the retelling her, actually our whole day was much more akin to something out of The Lord of the Rings. For a while I was even contemplating the possibility that there was a wizard manipulating the weather in order to slow our progress, perhaps to force us to take another path, through a mine for example? However, I didn’t know any mines in the area, so it didn’t work if that was the case, and instead we just trudged onwards.
First there was the wind! We woke up to this and it was not the conditions I would have picked for our first meaningful drive in our yellow camperine. In fact I’d describe that particular section as bowel loosingly scary! I don’t know if the wind was actually strong enough to tip us over but it sure felt like it was trying, especially during the always hair raising task of over taking laden semi trucks. Fortunately this didn’t last for the whole of the first days driving, unfortunately the weather that replaced it was both diverse and often, equally scary. We passed through some driving rain, a little fog, and some light snow before freezing rain and snow slush started to turn the yellow camperine into a passable impression of an explorers ship caught in arctic ice. When I hopped out to take a picture of Lil’ Mr PG hiking on the Columbia Icefields I took the opportunity to check the Camperines thermometer, with the wind chill and moisture it was measuring -33’c. All of this was easy though compared to the driving snow storm with which we finished our day, the visibility becoming so awful that we barely kept at half of the speed limit. It was really not the nicest way to start 3 months on the road and it was certainly a relief when we rolled into our destination for the day; Drumheller, one of the worlds premier sites for dinosaur fossils and home to the Royal Tyrell Museum. The relief was tempered somewhat by the cold though and we spent a fairly frigid first night and were woken to the drips of the frozen condensation melting above targeting any exposed skin to fall on. I think at this point the wife may have been regretting letting me convince her that the camper needed to be completed stripped out to save weight and provide space and contemplating how much room there would have been for a furnace if I hadn't been there.
Of course Drumheller maybe famous for its scientific work but the real reason we are here is to get the first of our photos with big things. Originally I had wanted to do our whole trip based around the large items that towns erect. I am sure there is a book there, I was going to call it ‘Go Big then Go Home’. Anyhow this may be a hilarious best seller but sadly the fact is the towns are distributed in a manner that looks pins thrown onto a map. As such I had to scale my ideas back a bit. Still doing as many as I can find though, the most outrageous the better!
Drumhellers big dinosaur provided a suitably impressive start to the project though and since we could climb (well three of us could, there was no wheelchair ramp to allow all of us up) inside the dinosaur itself it also provided a perspective that not all big roadside novelties can manage.
The Royal Tyrell Museum itself gave us a pleasurable morning wandering amongst the dinosaurs and the opportunity to recreate some of the photos we took during our last visit, 7 years previously, (almost to the day in a weird freak of timing) there is always something interesting in comparing photos taken in the same location years apart, especially when there are kids involved, it somehow puts it all in perspective; helps to remind us all to seize the day, a motto that is particularly apt for such a trip I think.