British Columbia has so much to offer if it's a BC Whale watching tour. Watch an Orca or humpback whale breach the surface, capture it all on that new video camera.

Whale Tours in BC

Some of the more well known whale watching tour destinations include; Victoria, Sidney, Campbell River, Tofino, Ucluelet and Port McNeill on Vancouver Island; Quadra Island and Alert Bay on the Gulf Islands and Prince Rupert in the North BC region.

Book a Whale Watching Tour with our Members Below. 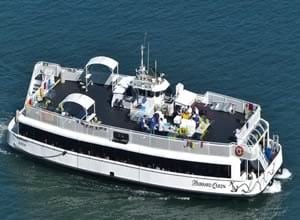 M.V. Burrard Queen is specialized in hosting all sorts of private charters for big and small events and professional functions for up to 220 guests. Our complete catering service provides fabulous cuisine and staff members that tend to your every need. Our wonderful vessel is designed with multiple decks, panoramic windows, a large dance floor, fully licensed bar and professional DJ systems with the state of art sound.
Slip A6 & A7, 750 Pacific Boulevard (Plaza of Nations), V6B 5E7
Surrey
VMT 0M7
Phone: 1 604-779-2258
Website