Parks and Trails in British Columbia

In Canada the mountain ranges, rivers, lakes, glaciers, forests, wetlands, wildlife, vegetation and heritage sites all play a big part in the creation of our BC park system.

Over 800 BC Parks in the province alone.

This, by no means, is the total number of wilderness and recreation parks in British Columbia, Canada as there are many National, Community, Regional and Forestry Recreation Parks also located throughout the province. This adds up to only 12.5% of our province is protected by BC Parks (very small percentage relatively) and 0.6% is protected by National Parks.

Provincial and National Parks are the most popular parks in the province. Some of the parks are very well developed with day use areas, amphitheaters, museums, parking lots, campgrounds, boat launches, showers and washrooms. Other BC Parks are left in their natural state.

Many of the Provincial and National parks include backpacking, hiking, mountain biking and horseback riding trails plus camping. There are 340 Provincial Parks with campgrounds (11,075 campsites) in British Columbia. Many have a "pay to use" format in place.

Forestry Recreation Sites are the most rural and remote British Columbia park destinations. They are often located on rough gravel roads leading deep into the backcountry to rivers and lakes. The BC recreation sites are more campsite than park with no power, pit toilets and sometimes a gravel boat launch but more often a roof top boat launch. Forestry Recreation Sites are self maintained. Please leave no trace behind. Pack out what you pack in!

British Columbia has many parks for all occasions and activities.  The Khutzeymateen Provincial Park is Canada's only grizzly bear sanctuary. The Tweedsmuir Provincial Park is British Columbia's largest provincial park covering 989,616 hectares. On Vancouver Island the 440 metre Della Falls in Strathcona Park is Canada's highest waterfall and is one of the ten highest falls in the world! 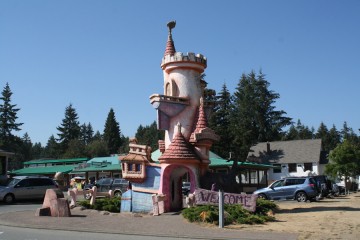 Coombs Village is located west of Parksville BC, on Vancouver Island in British Columbia, Canada. The village is a popular attraction because of the unique assortment of art, services, dining and shops.
Read more 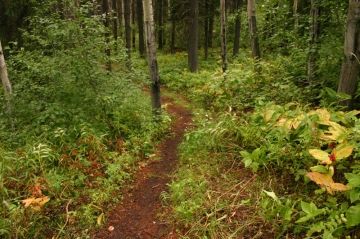 The campground is base camp - with the Opal Bed, Beaver Pond and Lookout Trails all starting from the recreation site. The wilderness recreation site acts as Mile "0" for these three trails.
Read more

During the summer seasons the trails are used by naturalists and backpackers primarily and when the winter arrives the trails transform into single track cross country ski and snowshoeing trails.
Read more 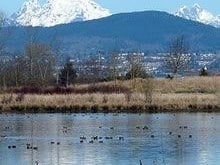 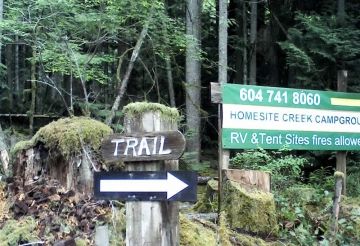 The Homesite Creek Trail cuts through forests for 2 km ( 1.2 mi.) and leads to the Homesite Waterfall, some sinkholes and a group of limestone caves. The caves are self exploratory, so beware, as the floor of the caves can be slippery.
Read more

The Gibsons Waterfront Seawalk explores along the coastline of Gibsons Harbour revealing the marine atmosphere of the community, as well as, providing beautiful marine scenery.
Read more