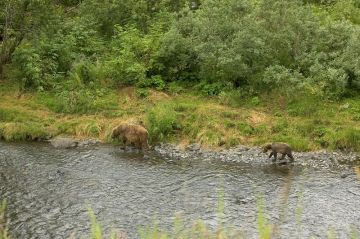 Khutzeymateen / K'tzim-a-Deen Grizzly Bear Sanctuary near Terrace, British Columbia, Canada is the largest parcel of land established in B.C. as a wilderness park protecting the 50+ grizzly bears in the area and their habitat. The goal of the park is to protect the grizzly from extinction and to protect the cultural values of the Gitsi'is First Nation people.

To the Gitsi'is people, the land holds traditional values and cultural significance. For centuries the people of Gitsi'is relied on the land for providing food, medicine and shelter. The people believe the grizzly is sacred and a spiritual animal of the people.

The wildlife sanctuary is the first virgin eco system set aside for the declining population of the north coast Grizzly Bear. Khutzeymateen/K'tzim-a-Deen Grizzly Bear Sanctuary is the main part (45,000 hectares) of the 380,000 hectare no hunting zone located in the Western Kitimat Ranges of the Coast Mountains. A preserved area, the park is best experienced observing and touring with a qualified boat tour or a certified floatplane tour. All visitors must register with the floating ranger station located in the Khutzeymateen Inlet when arriving.

The park is lush, untouched and remote. It is a rugged terrain, with towering mountain peaks, vast miles of wetlands, hidden estuaries, hectares of rainforest covered in rushing rugged rivers connecting to lakes and leading to oceans.

The sanctuary was created to protect the grizzly bear but the area is also home to other wildlife. Often when exploring with one-of-the-many sightseeing tours in the area operating out of Terrace and Prince Rupert you can see other species of wildlife like black bears, cougar, wolves and mountain goats.

The living eco system park is home to some birds and marine wildlife also like the raptor, murrelet, eagles, seals and whales. The Khutzeymateen and Kateen Rivers in the sanctuary is home to Chinook, Chum and Coho Salmon (a popular dish of the grizzly), as well as, steelhead.

:
How to Get Here: The sanctaury is accessed mostly by boat and floatplane while enjoying an eco tour with one of the tour companies listed on this website. The entrance to the wilderness park is located northeast of Prince Rupert, B.C. and west of Terrace, BC in the Khutzeymateen Inlet. All parties must register at the floating ranger station in the inlet.