“I have been lucky enough to watch and photograph wolves in the wild. I have seen, first hand, how beautiful these creatures really are. I have watched them as they watch me, listen to me and keep their distance away from me but still always keeping their eyes on me. Wolves are very smart but they, sadly, have such a bad rap.”

“Howl at the moon!” Actually, wolves do not do that. That is just one of the things they share with you when visiting the Northern Lights Wildlife Wolf Centre (www.northernlightswildlife.com) located in Golden, British Columbia, Canada. The Golden, BC wildlife centre provides educational programs including wolf viewing, interpretive guides and photography tours. 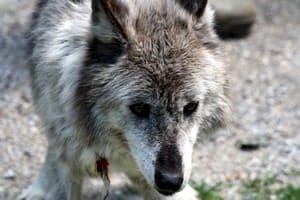 I have been lucky enough to watch and photograph wolves in the wild. I have seen, first hand, how beautiful these creatures really are. I have watched them as they watch me, listen to me and keep their distance away from me but still always keeping their eyes on me. Wolves are very smart but they, sadly, have such a bad rap. None of it deserved. Most of it are man-made hostilities based on bad information and human habituation.

So you can easily see why I was looking forward to my visit with Casey and Shelley Black and the Northern Lights Wildlife Wolf Centre. I, a wilderness connoisseur, so wanted to learn more about wolves and to visit with the on-site wolf pack – Maya, Moab, Keehta, Wiley, Moki, Mack, Scrappy Dave and Flora.

The wolf pack of the Northern Lights Wildlife Wolf Centre are bred as Karelian Bear Dogs. These dogs are trained to keep bears and cougars away from human populated areas. This practise of wildlife control has currently been used in the provinces of Alberta and Manitoba but nowhere else in Canada. Why is that? The reputation of wolves plays a big part in that decision. A reputation which is based on bad information. 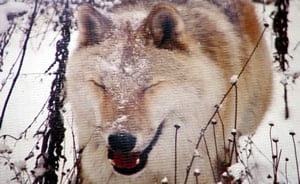 The main objective of the Northern Lights Wildlife Wolf Centre and the wolf pack is to educate the public about wolves and their important roles in the environment using proven facts and experience.

News, television, internet and movies do the wolf no favours because they always portray them as the “Big Bad Wolf”. It is a reputation which is slanted and one sided. The facts tell us a different story. Did you know the wolf only preys on the sick and injured of species (they feed on the weak and keep herds healthy). Did you know wolves kill less than 1% of all livestock killed. Did you know there are no records showing a non-habituated wolf killing a human being. Did you know…

Habituate means, “make or become accustomed or used to something” (wikipedia). The main source of wolves acting out of character is interaction with humans. We litter too much when out in the wilderness and we leave garbage lying around. Wolves are smart animals. Once a wolf figures out humans provide easy meals they hunt closer to populations. Human interaction with wolves is the downfall of the wolves reputation. So… it is refreshing to see efforts like those of Casey and Shelley Black setting the story straight. 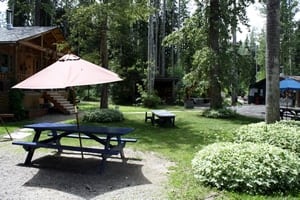 I arrived at the Northern Lights Wildlife Wolf Centre with great anticipation. I was looking forward to meeting the wolf pack and to learning more about wolves.

It was a beautiful sunny day when I entered the main courtyard of the centre. The courtyard was decorated with a few picnic tables, sitting benches and information signs about the wolves. People were meandering around. Over to my left were the large metal pens which housed the wolves. I learned later that when the wolves are not housed they are taken to a protected area to run free and wild and just enjoy life as a wolf. 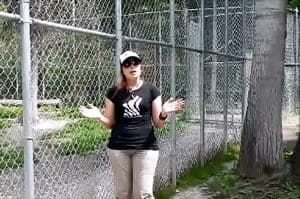 The guide was awesome! She knew her stuff and, boy, could she talk a good wolf game.

Our interpretive guide explained to us the history of the centre, provided us facts about wolves, introduced us to the wolf pack and how wolf packs work. She explained to us the different species of wolves, how they communicate, what they eat, how wolves get habituated, the cost of human interactions and so much more. The entire presentation was about 1/2 an hour to 45 minutes.

And yes, we got it all on video! However, lets be real here, putting together the video for ehTV we had to do allot of editing to cut the video down to about 5 minutes including photos, introduction and wolf video. Check it out! We embedded the video in this blog to make it easy. And… if you want to see the whole tour then may we suggest you go and visit the centre in Golden, BC. 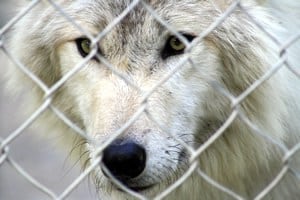 Once the very informative interpretive tour was concluded I proceeded to wander the pens taking more photos of Maya, Moab, Keehta, Wiley, Moki, Mack, Scrappy Dave and Flora (the wolf pack). Being me, a curiosity hound, I was compelled to read every information sign on the property as I snapped photos. I even caught myself talking to the wolves on occasion. A funny thing happened… I swear I held the attention of Wiley the Wolf as he seemed to be paying attention to what I was saying?

I walked away from my visit with a whole new, more improved, respect and appreciation for the wolf. Beautiful creatures. But then again, I am easy prey as I believe all wildlife are beautiful and play an important role in the life cycles of our eco systems. All living creatures have a purpose, and yes, that includes wolves and us humans.

I enjoyed my visit very much. I enjoyed meeting with Casey and Shelley. I admire the work they do and, understand, the obstacles they face. When ever in Golden, British Columbia, Canada drop by the Northern Lights Wildlife Centre and, at the end of the day, walk away with a whole new understanding of the wolf. 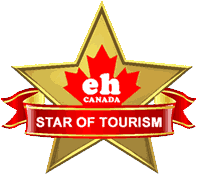 The “STARS OF TOURISM” program highlights Canadian accommodations, attractions and adventures the “eh Team” brothers explored during the summer of 2014 in the name of tourism and travel research for their ehCanadaTravel.com website, blog, social media channels and ehTV (YouTube).

The “eh Team” of ehCanadaTravel.com (eh Canada Travel & Adventure) are the brother team of Greg and Colin Girard. Together they are the brains behind the ehCanadaTravel.com travel website, blog, social media and ehTV which is the largest and fastest growing booking, planning and researching tourism and travel network for Western and Northern Canada – currently expanding into Eastern and Atlantic Canada.