Turning tragedy into solutions for beautification of our Parks. 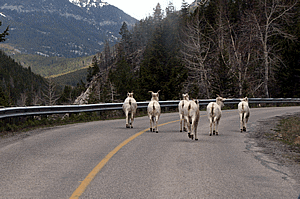 Every year there are hundreds of thousands of wildlife deaths and many human deaths because of wildlife-vehicle collisions on our highways in Canada.

In British Columbia, Canada -for example- the “BC Ministry of Transportation and Infrastructure (MoT) statistics show that from 1998 to 2007, 93,853 animals were reported killed on BC highways. MoT estimates that this number may represent only 25% to 35% of the real number of wild animals killed. Between 1988 and 2009, 47 people were killed in BC due to wildlife vehicle collisions.” (information provided by www.wildlifecollisions.ca )

In some parts of the country Parks Canada is making an effort to erect wildlife fencing along highways where high wildlife-vehicle collision rates occur. This is proving to be effective but costly.

In other parts of the country where migration routes and natural wildlife crossings are frequent Parks Canada are erecting wildlife tunnels (big oil pipe tunnels) or bridges where high volume vehicle traffic with wildlife migration patterns collide. This is also proving to be effective but costly.

“There is no question we would have higher mortality if the fences and crossing structures weren’t here,” says Steve Michel, a human-wildlife conflict specialist with Parks Canada “We know they are successful. They are also really expensive.” 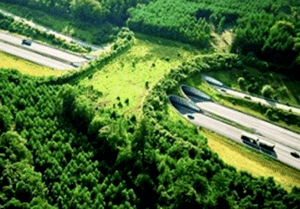 Wouldn’t naturally green overpasses require fewer materials and reduce costs… plus be visually attractive? We are no experts but from our research it should be. Here is an idea. Instead of city cement overpasses why not build overpasses like they do in Holland.

We are beginning to see these natural green overpasses taken more seriously in Canada but no real action on a large-scale as of yet.

Imagine if an overpass could become a beautification program for parks as well.

The NEXT Generation of Travellers.