What can you say about Golden, B.C., Canada but, “Wow!” The community is an outdoor tourism delight with all the trimmings. 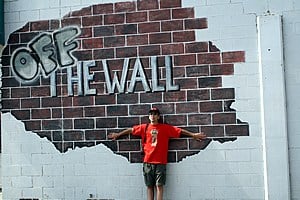 EH Team “Off The Wall” in Golden

Golden is located in the Kootenay region of British Columbia, Canada. It is a region rich in scenery, forest smells and transforming seasons.

Many who visit the region are marked for life with fabulous memories of glacier capped mountain ranges, wildlife sightings and therapeutic hot springs created from local mountain mineral waters.

Everywhere we look there are mountains. The Purcell and Selkirk Mountains swell up the sides of the community. It is a paradise tattooed with glaciers, summits and flowering meadows. They loom large and they are the home to all four seasons of adventures.

Everywhere we go we run into major rivers too. It is an easy task to do in Golden because the town rests on the banks of the Kicking Horse and Columbia Rivers. Two monster rivers in the Kootenays popular for rafting and kayaking.

And… get this… the local mountains and rivers also help create the borders and boundaries for six major wilderness parks in the region. Golden is part of a region we Canadians like to call Kicking Horse Country. A country hypnotized by nature.

We on the other hand are only here for a day and a bit so we had to keep it light but try to back-end it with some scenery and activity. 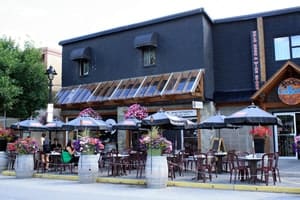 Outdoor Patio in Golden BC

Sometimes when you want to get a feel for a small town you go walk downtown. You can learn allot about a community by its people and buildings. On previous visits we explored the parks and trails but never poked our noses into shops and around street corners much.

This visit we are poking noses. We looked and touched and asked questions. We walked by outdoor cafes. We walked into an outdoor café. We sat by the downtown water fountain in the morning sunshine basking in all our java glory.

Then down the alley next to us we heard some music. It was soft at first but it was getting louder. Like the Pied Piper calling his mice we followed.

In an open market behind some buildings there was a band stand and some young kids playing some music. Their heads were down banging away, swinging back and forth to the music oblivious to their surroundings. Good thing because there were no surroundings to be had. No one was listening. The market was empty. At that very moment we were the bands biggest fans. 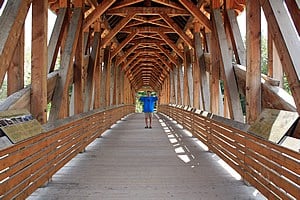 Next to the market was the Kicking Horse River and the Rotary Loop Trail. The path is a popular walking, hiking and biking path with scenery and bridges. So we walked it. Not all of it but some of it. The entire loop trail is 7 kilometres long and it provides views of the Columbia River too.

We passed baby strollers and little kids and big kids on bikes while walking the trail. Some older people sat on benches enjoying the sounds of nature. Some stood on the banks of the river lost in thoughts.

We walked and talked and planned and took photos here and there until the darkness came and slowly tucked us in. “Don’t let the bed bugs bite.” 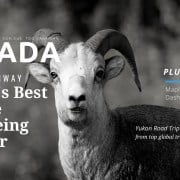