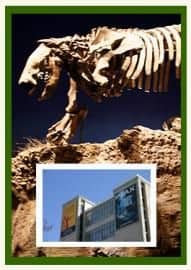 Many of the films featured at the IMAX Theatre are big budget adventures, biopics and documentaries from around the world. The Victoria IMAX Theatre broadcasts movie productions on a 6 stories screen with an audio sound of 12000 watts.

The IMAX films grab you by the collar and yank you right into the action. National Geographic Theatre experience is created using the latest 70 mm film technology in a rolling loop format that runs through a monster projector with each frame sizing an area 10 times that of a 35 mm film.

The IMAX theatre process projects films up to 70 feet wide. That is more then 4,000 times the area of your computer screen! So when landscapes, mountains, lions or just about anything is broadcasted up on the big screen it is looking pretty big and life like.

The National Geographic IMAX Theatre in Victoria seats up to 400 people in a surround sound auditorium located inside the same building as the Royal BC Museum.

At all times there is up to 5 films to choose per production run at the IMAX. It is best to phone and see what is playing at the theatre. Being a west coast attraction the IMAX does play many wilderness, wildlife and outdoor adventure type films.