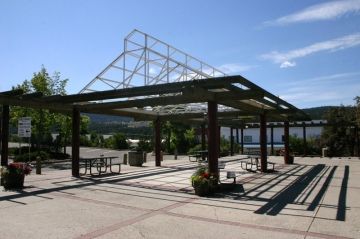 Courthouse Park Plaza in Williams Lake, Central Cariboo-Chilcotin Region, British Columbia, Canada is an outdoor gathering place in the heart of the retail sector in downtown Williams Lake. The centre of attention in the park plaza is the large canopy roof structure located on the upper plaza level. It is here people meet at lunch hour, while shopping the downtown stores and while exploring the city streets.

The park consists of two levels. The upper plaza level is highlighted by the canopy and is surrounded by a row of sitting benches and a few picnic tables. The lower plaza is at street level and is identified by the large standing clock on the sidewalk. Behind the plaza is a parking lot providing easy access to the plaza and downtown shopping.

There is a set of stairs on either end of the plaza marking the entrance to the upper plaza level. From the street level the upper plaza is surrounded by high vegetation closing it off from the city streets. A nice addition of green to the downtown core.