13 Capital City Celebrations Across this Great Country on July 1st, 2015. 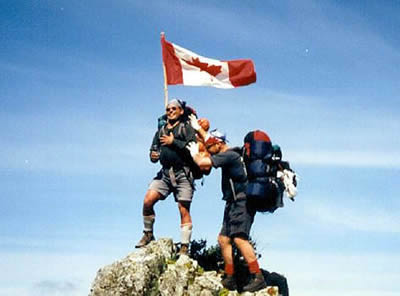 Enjoying any opportunity to raise the flag proudly

13 provinces and territories will be celebrating Canada Day across our great country on July 1st, 2015. The Capital City in each region, in many cases, throws the biggest party. So we thought we would provide a cheat sheet to the many events surrounding Canada Day Celebrations in each Capital City for each province and territory. If you are in the vicinity, get your Maple Leaf on and head down to the festivities and show off your Canadian pride. Remember, we love photos about Canada so please share them with us at #CanadaTravel on Facebook, Twitter, Google + and Pinterest.

If travel time is not on your side then make sure to head down to your local community celebrations and cheer on Canada.

“Victoria Celebrates Canada Day 2015 with family-friendly events, performances on their main stage, the return of A Flavor of Canada, and their Fireworks display blasting lights out over the Inner Harbour” [more info] 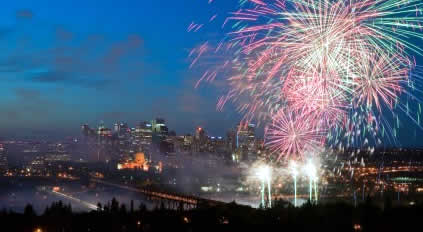 Photo Courtesy of City of Edmonton

“Edmonton celebrates with family events spread out around the city and finishes the celebration with their light up of the historic High Level Bridge and their Canada Day fireworks finale over the Edmonton River Valley.” [more info]

“Arrive early and the first 500 people will be part of the Living Flag photo celebrating the 50th birthday of Canada’s flag. There will be entertainment on the main stage and kids events and activities throughout the grounds.” [more info]

“Canada Day 2015 at The Forks. Come and check out the live entertainment and activities surrounding 3 Stages.” [more info]

Ottawa in Ontario is also the Capital of Canada and therefore tends to throw some of the biggest parties on Canada Day. Events are held during the day and into the night at such locations as the lawns of Parliament Hill, Major’s Hill Park, Jacques Cartier Park and on the closed streets of downtown. [more info]

In Quebec it is a bit different than the other provinces across the country as the best Canada Day 2015 celebrations tend to be in Montreal and not in the Capital of Quebec City. Montreal tends to show their National pride better than Quebec City throwing a bigger and better party with a host of activities during the day and capping off with fireworks at night.
[more info]

“Victoria Park, in Charlottetown, PEI (the birthplace of Canada) is the hub of Canada Day 2015 Celebrations. There are free concerts, family activities, and the largest fireworks in eastern Canada.” [more info]

“Canada Day Celebrations begin around noon at Officers’ Square with activities for all ages, live entertainment, food vendors, and a huge fireworks display over the St. John River at dusk. [more info]

Canada Day Celebrations begins with a sunrise ceremony and continues with a cake, bouncy castles, games of chance and some family concerts ending with a huge fireworks display. [more info]

Canada Day 2015 Celebrations in Whitehorse, Yukon is held at Shipyards Park located between the Yukon River and 2nd Avenue . An annual parade ends here at noon, where the swearing in ceremony and awards presentation is held. [more info]

“Just over a week after Canada Day, Nunavut celebrates its own independence on July 9. Each community has its own traditions, but most include history competitions, and traditional games and dancing. Many also serve large breakfasts or traditional Inuit foods like barbecued muskox burgers.”

ehCanadaTravel.com (eh Canada Travel & Adventure) is the largest travel and adventure website for booking and planning travel in Western and Northern Canada. The “eh Team” of eh Canada Travel & Adventure are a group of travel explorers, called Tourism Ambassadors, who research and write articles, take photos, create videos researching the many opportunities in travel, tourism, history and adventure in Canada.

We are currently expanding into Eastern and Atlantic Canada.

PLEASE mention eh Canada Travel during your travels.
SORRY we have to ask.
THANK YOU!

What You Do Not Know About Canada Ski Resorts?