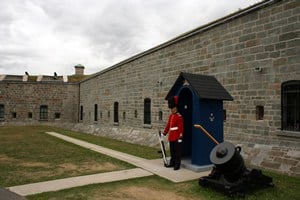 The Trans Canada Highway (Hwy #1) passes by Quebec City, Quebec, Canada. The highway does not go into the city like it does in Montreal which makes travel through the city easy. But, if you plan on bypassing Quebec City, you are plain crazy to miss such a historic, culinary and artistic gem.

Quebec City – in our humble opinion – is one of the most beautiful cities in the country for history, sightseeing, architecture, art, music, culture and food. And really… why would you miss a great opportunity to delve into the francophone culture of Canada.

Although Hwy #1 bypasses Quebec it is not always an easy drive getting to Quebec City. You see, there is a zoom-zoom factor which one has to be aware of. The zoom-zoom factor refers to the many cars and large trucks on Hwy #1 who are in a rush, racing at hyper speed, passing on double solid lines. Lunatics!

Get this. After passing.. some vehicles try to squeeze back into traffic like a square peg in a round hole. What is wrong with these people?!? And… get this, they are coming from all over Canada and USA based on their licence plates. All I see is a money grab for the police. But where are they? 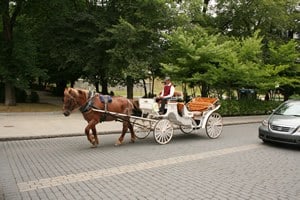 When in Quebec City we prefer to park and walk when researching and sightseeing. There is so much to see. All is within walking distance when furnished with good walking shoes, a map and some time.

On our trips we usually park near the “Plains of Abraham” fields which are located right behind the main tourism office in Old Quebec City. Get there early as parking is scarce.

The “Battle of the Plains of Abraham“ took place during the Seven Year War between the British Army and Navy, and the French Army. The battle was a deciding moment in the conflict between France and Britain over New France which later became part of Canada.

Most of our time, when in Quebec City, is often spent in Old Quebec City. It is a whole ‘nother world. Almost like visiting old France. Old Quebec City is enlightening, educational, entertaining and historically beautiful. The city is decorated with amazing architecture, historic landmarks and attractions. The streets are lined with funky shops, outdoor patios, eclectic boutiques and outdoor vendors. The outdoor entertainment is provided by street musicians and buskers. And if you sneak a peek down one of the side alleys there may be some artists and their talents at work. These are called “Artist’s Alleys.”

The “Plains of Abraham” are the front yard of a fortification fort called the Citadel. The Citadel is a popular attraction with actors dressed in period costumes. It depicts the history of the battles gone by on the Plains of Abraham while protecting Canada’s borders.

The walls of the Citadel extend out into Old Quebec City. The massive granite and rock walls merge with city streets creating tunnels and passageways. There are historic towers called ports towering over the fort tunnels like Porte Kent, Port St Jean and Port St. Louise. Back in the day these ports were guarded entrances leading into the fortification.

One activity we enjoy very much on every visit is walking those same fortification walls sightseeing Old Quebec City from above looking down. Think of them as raised historic sidewalks.

From the back-end of the `Plains of Abraham`there is a trail called the “Promenade Governors” which clings to the fortification before connecting with a raised boardwalk promenade called the Terrasse Dufferin. Here is where many tourist gather for views, shopping and more outdoor entertainment. 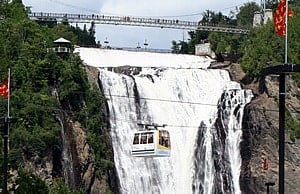 Walking the fortification walls, visiting Old Quebec City, the Plains of Abraham and the Citadel is a big couple of days. And there is still so much more to explore like the Artillery Park, the Ile de Orleans Island, the Route Nouvelle France, the Montmorency Falls and the waterfront pathway.

Not only that, it seems every building is an architectural gem. There are so many buildings of age that are photogenic like the the Beaupre Basilique Church, the Beaupre Cycleroma and the Parliament Buildings.

If you have time, one must plan a trip to the Montmorency Falls located just outside of Quebec City. There is a gondola that takes you to the top and then a suspension bridge which transcends you above the falls.

Time is short, so we say good bye again to Quebec City and cross the border into Ontario, Canada therefore continuing our 2013 Research Road Trip.

Canadian Summers are Open for Business in September