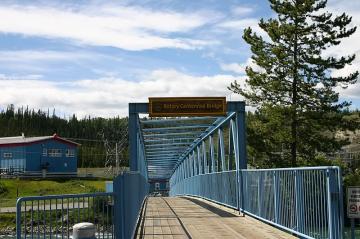 The 5 kilometre pathway is a paved and gravel route (mostly paved) explored by hikers, dog walkers, roller bladders and bikers. The Millennium Trail loops around, both, the east and west banks of the Yukon River from the Robert Campbell Bridge in the north to the Rotary Footbridge near the fish ladders in the south.

The Millennium Trail on the east side of the river is a forested trail exploring through aspen and pine tree forests. The east side follows the banks of the Yukon River to the corner of Alsek and Nisutlin Roads where there is a footbridge. The east side route passes by a salmon hatchery, the "intake" (a popular canoe and kayak Yukon River access point) before reaching the footbridge. Before crossing the footbridge there are viewing decks a few 100 metres ahead looking out over some fish ladders.

On the west bank of the Yukon River the pathway is more developed with lookouts and viewpoints. It follows the Robert Service Highway into town. In town the trail connects to some waterfront paved paths in the Peace Park and the SS Klondike Historic Site is sitting across the street.