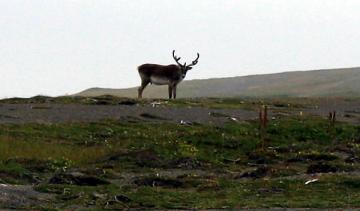 Detailed Description: Wapusk National Park is a wildlife sanctuary and sightseeing destination located south of the community of Churchill, Manitoba, Canada. Located on the shores of Hudson Bay, the region is home to polar bears, beluga whales, caribou and hundreds of bird species.

There are no roads leading into the park. The Wapusk National Park is accessed via wildlife sightseeing tours only. Access to the park is only provided by tour companies with large tundra buggies or flightseeing companies with helicopters and/or planes. The park needs to be protected so it can continue to be a breeding ground for many species of wildlife.

The park is home to one of the largest polar bear denning areas in the world. There is a caribou herd in the park numbering in the thousands called the Cape Churchill Herd. Beluga whales calve in the waters located, not far, from the park. And hundreds of local and migratory birds access the park for nesting and feeding.

Established in 1976, the Wapusk National Park measures 147,500 hectares and protects the Hudson-James Lowland Natural Region. It is a mixed subarctic environment of tundra and taiga consisting of tidal flats, marshes, dunes, meadows, limestone rocks, grass plains and spots of boreal forest consisting of white spruce and larch trees. The park is considered one of the largest examples of wet peatlands in North America.

About half of the landscape in the park is covered in water. The region is considered a very active inter-tidal zone. For example the distance between the low tide mark and the high tide mark... get this... can reach 10 kilometres! Low tides reveal tundra ponds, limestone rocks, salt marshes, beaches, hectares of muskeg and mud flats.

The Wapusk National Park attracts many birds to the region year round. The park is a protected birding site vital for many migratory birds. There have been over 200+ bird species sighted in the park during the spring and fall seasons.