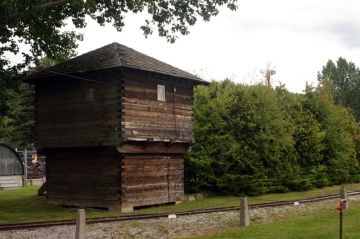 Lheidli T'enneh Memorial Park (previously called Fort George Park) is located in Prince George, British Columbia, Canada and is one of the more popular community park destinations for families, groups and sightseers in the community of Prince George, BC, Canada. It is the city's largest park covering over 65 acres of well maintained lawns dissected by pathways leading to viewing benches looking out over the Fraser River, flower gardens, a First Nation cemetery and a children's playground and water park.

Lheidli T'enneh Memorial Park includes many amenities onsite - most connected by a paved pathway. The park includes picnic tables in the sun and shade, sitting benches, a large picnic shelter, washrooms, monuments, a volleyball court, tennis courts, a playground and a band shelter. The shelter and the large open grass lawns provide the means to hold large events in the park.

The walkway in the park works its way around flower beds and trees leading to the main walkway following the shores of the mighty Fraser River. Sitting benches line the shore providing views of the torrent river and of Yellowhead Bridge. The main paved walkway in the park connects to the Heritage River Trails.

The park is also a gateway to understanding our BC history. Next door to the park is the Fraser Fort George Regional Museum. The museum stores the artifacts and stories of the early European pioneers who settled to the region. The museum is near the playground and is easily identified by the miniature steam train and the wooden fort.

Inside the park is a small First Nation Cemetery named the Lheidli T'enneh Burial Grounds. Lheidli tenne means "people from where two rivers flow together". The cemetery was once a main village site until the early 20th century. Today, all that remains of the village is the cemetery.