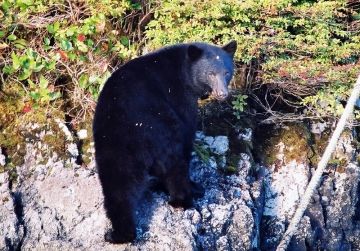 A massive 1470 square km wilderness park which includes evidence of a deep spiritual history of the Haida people throughout the park. As, far back as 10,000 years ago, the land of Gwaii Haanas was home to the Haida people.

Today, there are remnants of old ancient villages, Haida Totem Poles and CMTs (Culturally Modified Trees) located throughout the Gwaii Haanas National Park Reserve. These are trees with removed bark strips - an art of the Haida First Nation people of removing a strip of bark from a cedar tree (so not to harm the tree). The bark then would be used for building baskets, tools, mats and much more.

Some of the more popular destinations in the park is the Village of Ninstints. From a boat you can spot the spiritual totem poles standing at attention paying tribute to the Haida culture. "Archaeological and historic artifacts are left to their natural process as per Haida tradition".

All access to this area is patrolled by the Haida Gwaii Watchmen. Please show the utmost respect for the park and the traditions of the Haida people by reporting to the Haida Watchman Office in Skidegate your intentions when visiting this historical park.

In the beginning, the Gwaii Haanas National Park Reserve was scheduled to be logged. A public uprising soon followed as the lands had a large cultural, historic significance and was a breeding ground for many species of wildlife. The Haida people and the Canadian Government came to terms to protect the ecological treasure in 1993.

The Gwaii Haanas National Park Reserve accounts for about 15% of the Haida Gwaii Islands land mass covering 138 islands stretching from Tasu Sound / Laskeek Bay to Woodruff Bay / Cape St. James. The island park is referred to as the ‘Canadian Galapagos’ because of the number of endangered species that live here.

The Gwaii Haanas Park is one of the last ecological wilderness parks left to explore where history has been respected and kept in tact. the Haida Gwaii Islands' park is also home to many significant eco systems. In the Burnaby Narrows the ocean waters contain more protein per square metre than any other place on earth.

The park is also the breeding home to colonies of the red-beaked Puffin bird. The shorelines of the Gwaii Haanas National Park Reserve enjoys the highest concentration of Bald Eagle nests per kilometre of shoreline than anywhere else in Canada. The Peregrine Falcons thrive in the park also, as there are more of them then anywhere else in the world! And they wanted to log the area? What were they thinking!

In 2005, Gwaii Haanas was rated #1 Park Destination in North America by a panel of experts polled by National Geographic Traveler magazine. The park is, no doubt, a prime location for adventure seekers as the area draws a large number of people interested in sea kayaking, photography, camping, boating, hiking and fishing. Gwaii Haanas is known as one of the top sea kayaking and boating destinations in the world.

Boating and sea kayaking in the area has proven to be a life experience. Not only is there the intense Haida culture and historical artifacts but sightings of whales is very common in the area, especially Humpback and Minke Whales. The Gwaii Haanas National Park Reserve also has the largest breeding colony of Steller sea lions.