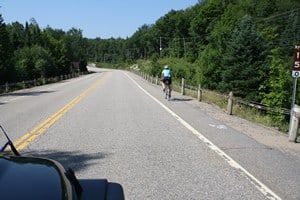 Travel always packs along a big dose of excitement! Nothing excites Canada eh more than collecting experiences and memories for their websites! You see… many of their daylight and night owl hours are spent working on the computer talking Canadian outdoors, tourism, wilderness and adventures.

In their humble opinion the only way to promote Canada is to know Canada. That is what Canada eh Travel and Adventure does. They are a “boots on the ground” travel website. Been there. Done that. Know it. Share it.

Most other tourism information sources online seem to like to grab information from where they can get it and then call it their own. These are the same tourism organizations who never set foot in the park, walk on a trail or visit an attraction but seem to deem themselves knowledgeable.

All the information on Canada eh Travel and Adventure is self research and accumulated from the documentation taken while on research road trips. So when it comes to their summer research season you can almost feel how excited the The EH Team of Tourism are.

The 2013 summer research season began this year in Lepreau, New Brunswick, Canada. It was a foggy morning on the Bay of Fundy. A bit creepy. A bit moist. A bit like a scene straight out of a bad horror movie.

The fog on the bay takes away your sight and leaves you blind to the landscapes and “oceanscapes” that surround you. Listen closely and whispering in the wind one could hear the waves crashing the coastline rocks. What was left was silence.

Breaking the eerie silence was the jeep engine starting up. The cofounders of Canada eh Travel and Adventure, Colin and Greg Girard. pulled out of the driveway and soon disappeared into the misty fog… not to be heard from again. Not true. The Girards were heard from again. I  just got carried away with the bad horror movie vibe. LOL.

This time the research road trip was across Canada. It involved heavy kilometres traveling from southern New Brunswick on the east coast of Canada to Vancouver Island, British Columbia on the west coast of Canada. For the next two weeks the EH Team will see plenty of tourism while crossing provincial boundaries – falling in and out of regional cultures, traditions and languages. 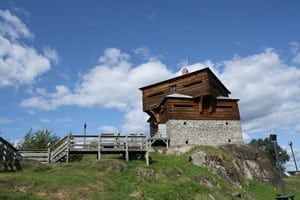 Edmundston is located in the Appalachian Mountains at the corner of the Saint John and Madawaska Rivers. Nearby is the USA border and Quebec, Canada. Hence the reason a high percentage of the local population in Edmundston are francophone.

While in Edmundston we visited the Petit-Sault Blockhouse and the riverfront walkway.

The Petit-Sault Blockhouse in Edmundston is a historic site. It is a learning experience detailing the history of the Canada and the USA border. But… it is more than that. The attraction is a tower providing sightseeing views of the surrounding community and rivers. The Blockhouse was constructed in 1841. There are tours provided by actors dressed in period costumes and artifacts from times gone by.

Another highlight was the Linar Park walkway. It is a great opportunity to walk the downtown core of Edmundston while enjoying river views, lookouts, picnic sites and sightseeing benches. One bridge crosses the river and there is a viewing area in the middle.

From Edmundston, New Brunswick the caravan of “eh“ headed towards the New Brunswick – Quebec Border and into the community of Riviere-du–Loup, Quebec.