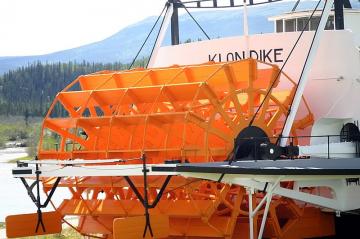 The SS Klondike is located on the banks of the Yukon River near the Robert Campbell Bridge. The SS Klondike was part of a fleet of 250 riverboats that once explored the mighty Yukon River and the surrounding chain of lakes and rivers.

The historic SS Klondike riverboat, also referred to as a sternwheeler or paddleboat, was constructed in Whitehorse to service the Yukon River in 1929. The first boat was named the SS Klondike 1, it was the first riverboat to accommodate loads of over 272 tonnes. However, in 1936 the sternwheeler hit shore near Teslin River and received heavy damages and was retired.

SS Klondike 2 was built soon later. From 1937-52 the riverboat was used to transport supplies up and down the Yukon River. Cargo would include mostly silver lead ore which was delivered from the mines near Mayo, Yukon via the Stewart River to a rendezvous point with the SS Klondike.

Wood was the fuel of choice for riverboats. Along the routes of the boats there were, what is called, wood camps. Think of them like gas stations. The riverboats would pull into the camps and refill their wood supply so to continue their journey. It was allot of wood too as riverboats, in general, could consume as much as 2 cords of wood an hour.

Roads started to be constructed. Planes started to service the Yukon. The use of the riverboats faded. From 1953 - 55 the sternwheeler was transformed into a cruise liner in a last ditch effort to salvage the riverboat. But in the late 1950s operation costs were too high and the ship was retired and moored forever on the shores of the Yukon River ending its career as a tourist attraction.