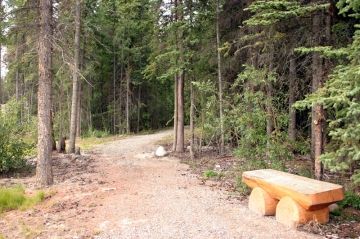 Detailed Description: George Johnstone Trail in Teslin, Southern Lakes, Yukon Territories, Canada is a tribute recreation trail located in the village of Teslin. The trail is a year round recreation destination used by hikers, bikers and cross country skiers.

George Johnstone was a local leader of the Tlingit First Nation people. George was a trapper and then a leader of innovation completing his life as a well known photographer of the Yukon Territories. His bloodlines run deep as he was a descendant of Chief Kowakha of the Taku River First Nations.

In the days of George Johnstone there was no Alaska Highway. The transportation routes for the First Nation people consisted of the Yukon River, Teslin Lake and the Nisutlin River. In 1928 that all changed. George went out and bought a Chevy and barged it to Teslin.

Soon later he built a 6 kilometre road to Fox Creek to transport people from village to village operating as a taxi company. In the winter the sedan would be painted white to camouflage with the snow covered Teslin Lake so George and his buddies could go hunting for wolves.

Later on in life his road was used as the foundation for the Alaska Highway near Teslin. Today the trail is a reminder of the George Johnstone highway.

George Johnstone is well remembered in Teslin. There is the hiking trail... and a museum dedicated to Johnston which houses his white chevy and many of his belongings including some of his photographs of the Yukon until 1940. The museum grounds include a picnic area, artifacts and many informational signs.