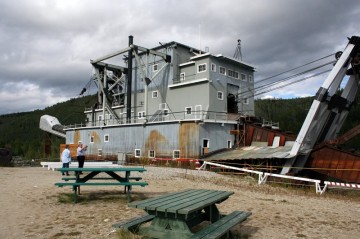 The majority of the big mining operations in the region employed these monster diggers. The machines would troll along the creeks and rivers sifting the soil searching for minerals. The dredge machines were like a walking assembly line with various parts performing various functions.

The Dredge 4 machine stopped operating in 1960 by accident or was it faith. The unit was working away when it sunk itself in the soft sands of the Bonanza Creek. It remained stuck until 1990 when the government recovered the machine from its soggy grave and restored the unit as a National Historic Site of Canada. Today, there are picnic tables and interpretive signs at the site.

Dredge 4 is the largest wooden hulled, bucket line dredge in North America. It played a big part in the development history of the Yukon. Today it is on display in the mining back country hills near Dawson City. It is said to be one of the more popular attractions in Dawson City. We beg to differ.