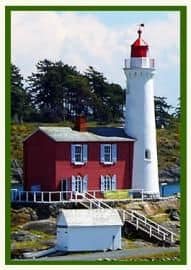 The Fisgard Lighthouse was the very first lighthouse put into operation on the west coast of Canada. The historic landmark was constructed as an operational beacon servicing the naval fleets of the British Royal Navy's Pacific Squadron.

Fisgard Lighthouse is a sightseeing destination providing views of the Olympic Mountains and the Pacific Ocean. There are often marine sightings as well including sail boats, yachts, cargo ships and navy vessels.

The historic landmark also operates as a museum with exhibits detailing the stories of lost ships, the life of a lighthouse keeper and the battles won and lost fighting west coast storms.

The site also doubles as a birding and wildlife destination. The unique location provides opportunities for birders to capture sightings of blue herons and bald eagles and for photographers to capture photos of sea lions, seals and whales.

To accommodate your visit to the Fisgard Lighthouse there is a day use picnic area.