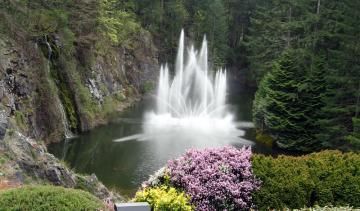 The Butchart Gardens began as a limestone quarry dating back to the early 1900s. Over time the quarry was transformed into one Canada's premier garden attractions.

The floral gardens are the brain child of a cement contractor by the name of Robert Pim Butchart. Robert and his wife, Jennie Butchart, moved west to Victoria, BC on Vancouver Island from Ontario, Canada.

At the time of their move the Canadian Pacific Railway was replacing it's wooden bridges with cement. Butchart - in 1904 - formed the Vancouver Portland Cement Company and became a supplier to the railroad.

Jennie Butchart embraced the west coast wilderness environment with her green thumbs. She recognized that the mild temperatures and the lush environment was an ideal setting for gardening.

Slowly the gardens grew and the Butchart Gardens was born. The Butcharts received many accolades. Robert Butchart was given the key to the city and was made a Freeman of the city of Victoria in 1928. Jennie Butchart was named Citizen of the Year in 1931.

The gardens fell into despair after the death of Jennie Butchart. The grounds were left unattended and became a wilderness garden up until 1946. It was then that Ian Ross, the grandson of Jennie Butchart and his wife, Ann Lee Ross, resurrected the Butchart Gardens. To help with bills the Butchart Gardens started charging admission and generating revenues from their Seed and Gift Store and the Benvenuto Tea House. Today, the gardens are open year round.

The rose collection of the garden is one of the best in the world. Each rose is marked with the country of origin. Overall there are 117 varieties of tea rose plants, 64 types of floribundas, and 400 grandiflora roses planted on the 22 hectares of Butchart Gardens.

Further to roses - the rhododendrons are a dominating sight in the early spring. The assortment of perennials are a highlight throughout most of the year. The Chinese Gardens and the Italian Gardens are big attractions during the fall.

Butchart Gardens is always entertaining families with such events as a fireworks display and stage shows running in the summer between July and August. The winter season, especially near holiday season, the Butchart Gardens are decorated in Xmas lights accompanied by carollers and a brass band bringing joy to the world.