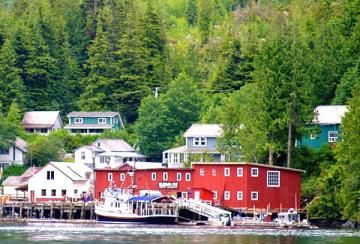 Telegraph Cove is a small adventure destination hamlet located on Northern Vancouver Island in British Columbia, Canada - just south of the community of Port McNeill.  The adventure destination is nestled in a quiet little bay providing easy access for boating, sailing and kayaking enthusiasts to explore the waters of the Queen Charlotte Strait and the Broughton Archipelago. To the north of Telegraph Cove is Cormorant Island and the First Nations community of Alert Bay. To the south are the Hansen and Compton Islands.

The marina in Telegraph Cove has over 150 berths for visiting boats and a  store for resupplying. For many cruising yachts, kayakers and boats the marina is a planned stop prior to embarking on any long haul voyages to Robson Bight and the Broughton Archipelago.

The small hamlet is straight out of a postcard. There is a unique waterfront boardwalk in the village connecting berths and buildings. Standing on stilts, the boardwalk is home to many of the businesses operating in the community. There are restaurants, gift shops, accommodations, heritage buildings and tour companies for whale watching and kayaking. The cove is the birthplace of one of the first whale watching tour companies in Canada.

The boardwalk community was first established in 1912 as an Air Force base during WW 2. The area has gone through many transformations since that time as you can expect. For example, after operating as a base for the Air Force the community became a telegraph station, then a fish saltery and then a sawmill. Today, Telegraph Cove is a wildlife tourism destination on the west coast of British Columbia on Vancouver Island.

Not far from the boardwalk and wharf in Telegraph Cove - only a short stroll away - is the Johnstone Strait Whale Interpretive Centre. It is a museum and research facility also referred to as the " Bones Project".