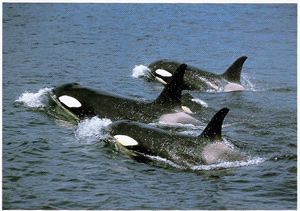 No visit to Vancouver Island would be complete without a boat trip around the lovely Gulf Islands, especially when there's a chance of seeing some whales!

Victoria may be the capital of British Columbia, but a departure from the sleepy hub of Sidney will allow you quicker access to a world where eagles, Humpback and Orca whales, porpoises and seals roam free. Found at 2537 Beacon Avenue, the small size of Sidney Whale Watching means that you'll instantly feel welcome, unlike some larger tours where the guides are too rehearsed and distant as a result. The friendly and easy-going staff are locals to the area which increases the authenticity and personal touch of the tour. They'll even let you store your belongings behind the desk before the room is securely locked.

A trip costs $124 after tax for an adult (about £62) , with reduced rates for children and seniors. This may seem steep but the amount is definitely well-justified by the experience. For 3-3.5 hours, you'll be spoiled on a tour that comes with much amusement, geographical knowledge and generosity in terms time spent watching for whales.

You'll feel like you're about to be shipped off into space as you step (/waddle) out in your float suit. A hat and gloves are also advised as once the boat gets going, it can get pretty chilly! I personally enjoyed the rejuvenating feeling of fresh sea breeze clapping my cheeks as we dashed over the water in hopeful pursuit.

I've gone on other whale watching tours on bigger boats with larger numbers, but the size of 12 on this boat allows you to feel more involved in the experience. The boat's rubber material makes them a lot more fun to ride the waves in whilst also bringing you closer to the water (and it's possible that the whales are attracted by their vague similarity in appearance!)

For some, being on a small boat in a vast ocean can feel too isolated and subsequently scary, but the moderate climate combined with the calm waters of this region creates a peaceful haven of tranquility once the boat's engine is turned off. Close your eyes and let yourself be soothingly rocked into a state of bliss as the boat bobs up and down gently, whilst majestic creatures rove below.

We spent about an hour in an area where three Humpbacks from the same family would greet us with a spurt of water as they rose out of the water before leaving us entranced watching the prolonged view of their long tail gliding smoothly back under the surface.

The Humpbacks tended to hide under the water for five minutes, but their sudden emergence from the deep always came as a pleasant surprise. A fellow watcher started singing in an attempt to encourage them out. It must have worked because seconds later, they rose for air just 15 metres away, leaving us gasping in awe.

As the whales said a final goodbye with a friendly flick of their tail, we ventured on towards a patch of rocks where a colony of sea lions congregated. These blaring blobs are hilarious to watch as they waddle into new positions and attempt to heave themselves out of the water. During the tour we also encountered a bald eagle scanning for prey, the diving fins of shy porpoises,  and many super cute speckled seals. Unfortunately there were no Orcas on display today, but this couldn't take away too much from a highly satisfying tourist experience.

Our tour ended with a lovely journey between some of the Gulf Islands, including Saturna and the North and South Pender Islands. Warning: the dreamy houses on these islands may make you want to quit your city day job and live a quiet life on the edge of the ocean.

Overall, the tour sealed a great afternoon! (No pun intended...sort of)

We were lucky to grab one of the last tours, as the season runs from March to late October.