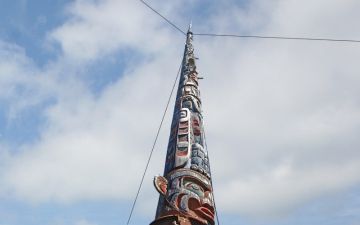 None come bigger than this. There are many beautiful and historic totem poles on Cormorant Island. Some say somewhere in the low 30's. But none attract more attention than the World’s Tallest Totem Pole, ironically located near the Namgis Big House (a traditional ceremonial lodge).

The totem pole measures 53 metres tall. That is about 173 feet for our American friends. Jimmy Dick was the Chief Carver. The traditional figures on this pole represent many of the families that belong to the Kwakwaka’wakw First Nation.

Some of the figures which caught our attention where the Bear and the Salmon ( Sisiyutl-Mamalilikala ); Whale ( Gwa’sala-

'Nak̕waxda'xw ) and the Sun God ( Gusgimukw ) perched on the top.

As you explore the island their are many totem poles to be observed - some standing and some fallen to the ground. The First Nation People believe that once a totem pole falls is has served its time and now should be returned to the earth.

How To Get ToWorld’s Tallest Totem Pole

:
How to Get Here: From the BC Ferry take a left on Front Street and then a right on Park Street and another right on Broughton Street. You should see the totem pole and the Big House at the corner of Boundary Road.

alert-pole
PreviousNext
No reviews yet for World’s Tallest Totem Pole.