So..  Bro and I have finally met up, caught up and tracked each other down near Canmore, Alberta. We traveled for days and days and our paths finally came together so we could plan, work and rest.

But working with the campground parks in Alberta is turning out to be a  allot more work than it is worth. A little ego in the park system. Night and day when compared to the parks in British Columbia.

So.. we moved on to find friendlier neighbors. We decided we will try to support more private parks in Alberta, those who are heavily taxed and do not receive government hand outs.

But, at the same time, we decided Bro should go north and look for a base camp around the Edmonton area. I will go south and find a spot near Calgary as I had allot to accomplish still in the foothills.

That brings me to today. Bro found a spot in Drayton Valley and I settled in Black Diamond located southwest of Calgary near Okotoks.  Both parks welcomed us and are not government campgrounds.

Speaking of Okotoks – that is where I  spent most of the day researching. And what a find it was. It is totally under rated in the province, especially for its size.

Okotoks (along with Lethbridge) is now the second community in Alberta which pleasantly surprised me!  You never hear much about Okotoks when talking Alberta. It was very clean, very friendly and very active.  Some highlights…

Okotoks enjoys an amazing paved parkway of trails within the community following both sides of the Sheep River. The path connects the community and the parks. Tons of people utilize the paths.

Another are the stores in the Olde Downtown area. Yes I said stores and shops but not for shopping. (Although shopping is good) I was more impressed with the collection  of restored buildings and homes converted to shops, offices, stores, clinics, restaurants, banks.. surrounded by flowers and tree lined steets. It is something to see.

The highlight of the day is my quick trip out to the Frank Lake Bird Sanctuary. Which I had to find out from my collection of maps. The tourist info did not even mention it in High River and it is only 8 kilometres away.

The park is a collection of small dirt paths and a boardwalk path leading out to a covered lookout shelter with interpretive signs and benches.

There are birds everywhere. Birdwatchers take note. I must of just walked the paths clicking pictures of birds for 1.5 hours.  here is one I had never seen before. It is a Ruddy Duck I think. Never seen a duck with an aqua blue beak before? 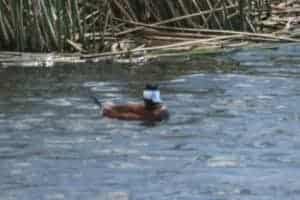