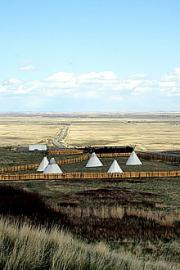 Head-Smashed-In Buffalo Jump is a First Nation sightseeing and historical destination located northwest of the community of Fort MacLeod, Alberta in the southern Alberta region of Canada.

Located in the Porcupine Hills of Alberta, the Head-Smashed-In Buffalo Jump details the history of the buffalo, the hunt and the life and times of the Plains First Nation people.

The Head-Smashed-In Buffalo Jump preserves and protects the actual site of a buffalo hunt. The site is the oldest buffalo hunting grounds of its kind in North America. And in 1981 the site was recognized as a UNESCO Heritage Site.

A welcome centre greets visitors who visit the heritage site. Inside there is a museum, food concession, theatre, gift shop and five stories of interpretive exhibits. Outside there are interpretive walking trails, tipi camping and two buffalo jumps.

During the summer months there are Blackfoot First Nation ceremonial dances and drumming celebrations. The site is also available for events, festivals and special gatherings.

The welcome centre is a very unique structure. It is built into the cliffs of the main buffalo jump becoming, almost, camouflaged by the surrounding sandstone landscape.