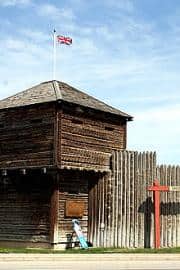 The Fort is a museum detailing the history of the Northwest Mounted Police (NWMP) and the lives of the First Nation people in the Alberta region of western Canada.

Inside the high fortified walls of the wooden fort are historical exhibits and displays of the Northwest Mounted Police and First Nation people dating back to when the NWMP first arrived in 1874. At that time Fort MacLeod was the main headquarters for the police for all of western Canada.

The Fort Museum of the Northwest Mounted Police includes artifacts, clothing, interpretive exhibits, photos and dioramas detailing the history of the mounties. While the Blackfoot Gallery in the fort tells the story of the First Nation people.

There are tours available with interpretive guides. And if you time your visit right you may be able to enjoy one of the NWMP Musical Ride ceremonies.

May 23 , 1874 the NWMP were created by government to bring law and order to the Alberta and Manitoba regions which, at the time, was called the Northwest Territories.

The Fort was first constructed on an island on the Oldman River located east of the current site. The fort was named after Colonel James MacLeod who led the first troop of officers across the prairies from Manitoba to southern Alberta to establish the fort.

Building on low lying land in the middle of a river was not a good idea because of the constant threat of floods. After Years of flooding the NWMP moved their fort to higher ground to its current location on a high bank in the community of Fort MacLeod.

How to Get to The Fort

Travel to the community of Fort MacLeod in the province of Alberta, Canada. From Main Street Colonel MacLeod Blvd in Fort MacLeod turn north on 3rd Street. Travel 1 block north and the fort is on the opposite side of the highway.