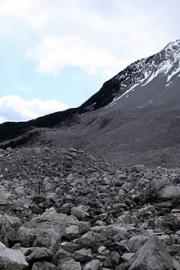 The 1903 a large chuck of limestone broke loose from the slopes of Turtle Mountain and came crashing down at 4:10 in the morning. The slide destroyed many buildings and many lives in just over 90 seconds.

Frank Slide was a devastating natural disaster that moved the ground and altered the landscape forever. Reports indicate that over 82 million tonnes of Turtle Mountain fell down on the unsuspecting people of Frank that morning.

The Frank Slide measured approximately 1 kilometre wide, 425 metres high and 150 metres deep. Once said and done the landslide covered over 3 kilometres of the valley floor in Crowsnest Pass.

Before the slide. the community of Frank was a small mining town with a population of about 600 people. And then - in just 90 seconds - the town lost 70 lives, some homes, a store, a stable, a construction camp, a few ranches, a mine, many kilometres of railroad tracks and the main road in Crowsnest Pass to the Frank Slide

Today, Highway #3 drives right through Frank Slide. Rocks and boulders are piled high as you drive through the fall out. There are a few lookouts along the route with information signs.

Off the highway is an interpretive centre and another viewing area with better views of Turtle Mountain. From the centre there is a 1.5 kilometre loop trail with interpretive sign markers exploring the slide.

How to Get to the Frank Slide

Travel Hwy #3 to the municipality of Crowsnest Valley in Crowsnest Pass, Alberta, Canada. From the community of Frank on Hwy #3 continue to travel east, a short distance, to the parking lot of Frank Slide.