Skijoring in the Yukon is too much fun!

Skijoring in the Yukon Canada - I couldn't wipe the smile off my face. You've heard of e-biking? Well, skijoring is dog-power assisted cross-country skiing – or as we started to call it, d-skiing! The term "skijoring" is derived from the Norwegian words meaning "ski driving." Skijoring is a type of cross-country skiing where a person on skis is pulled by one or two dogs. Sometimes other animals like horses are used for skijoring. The Sami people indigenous to the Nordic countries used reindeer to pull them across the snow. It's a historic sport that plays well in the North of Canada. 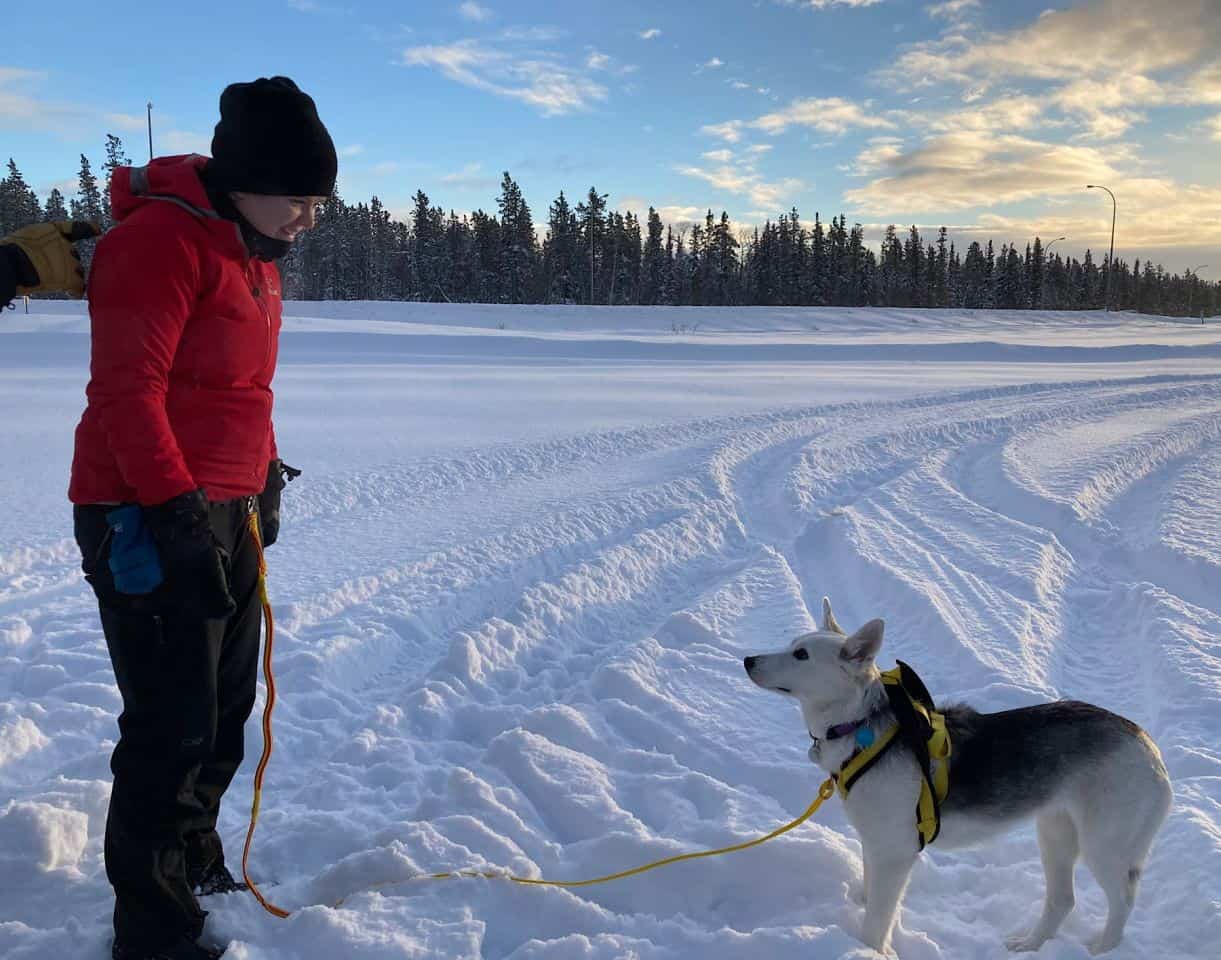 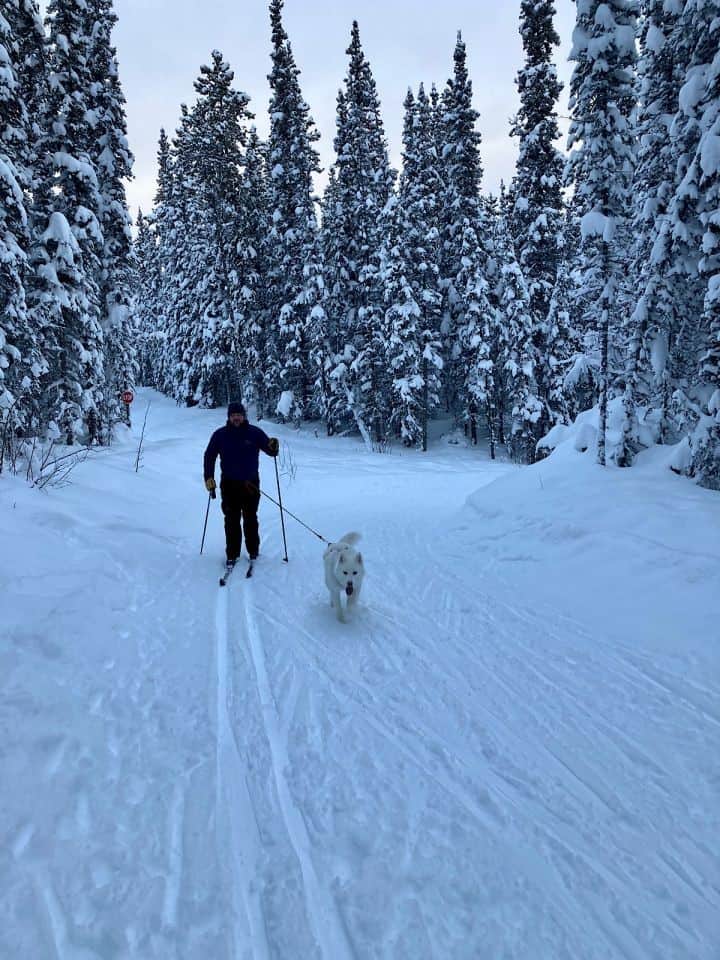 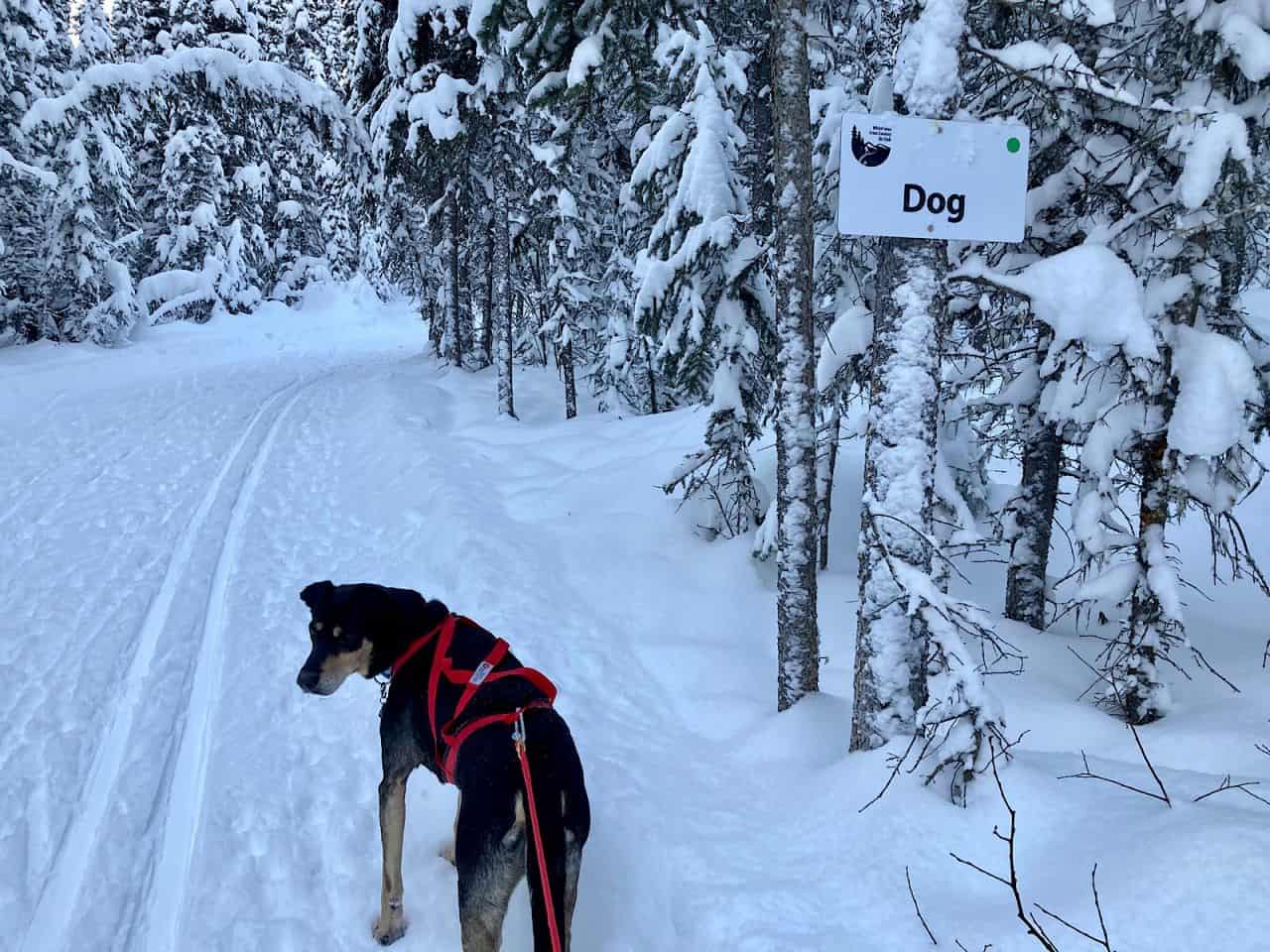 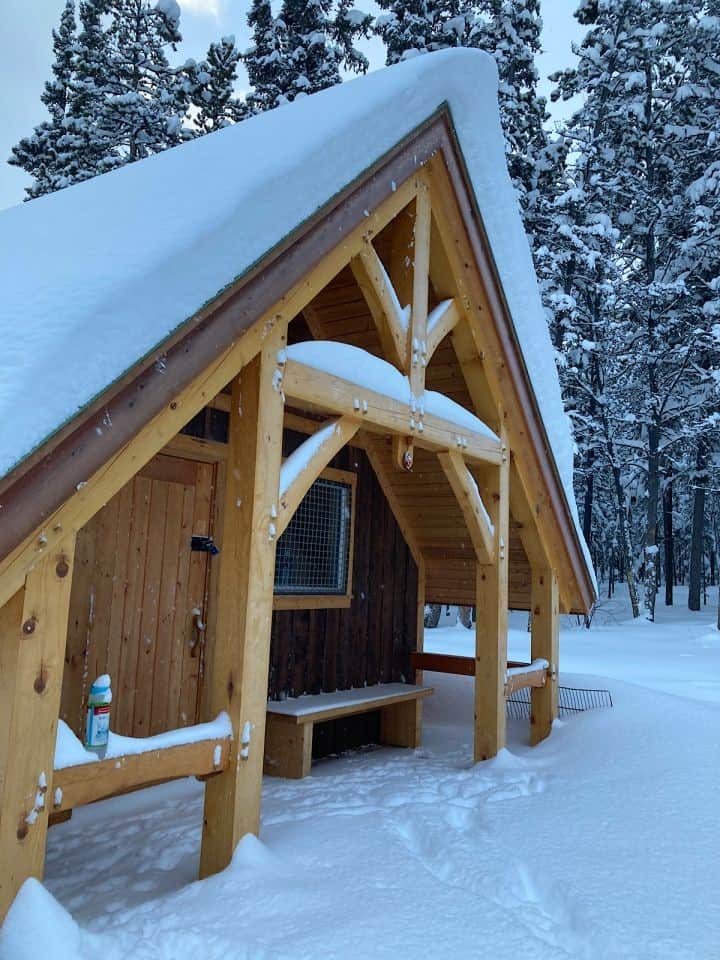 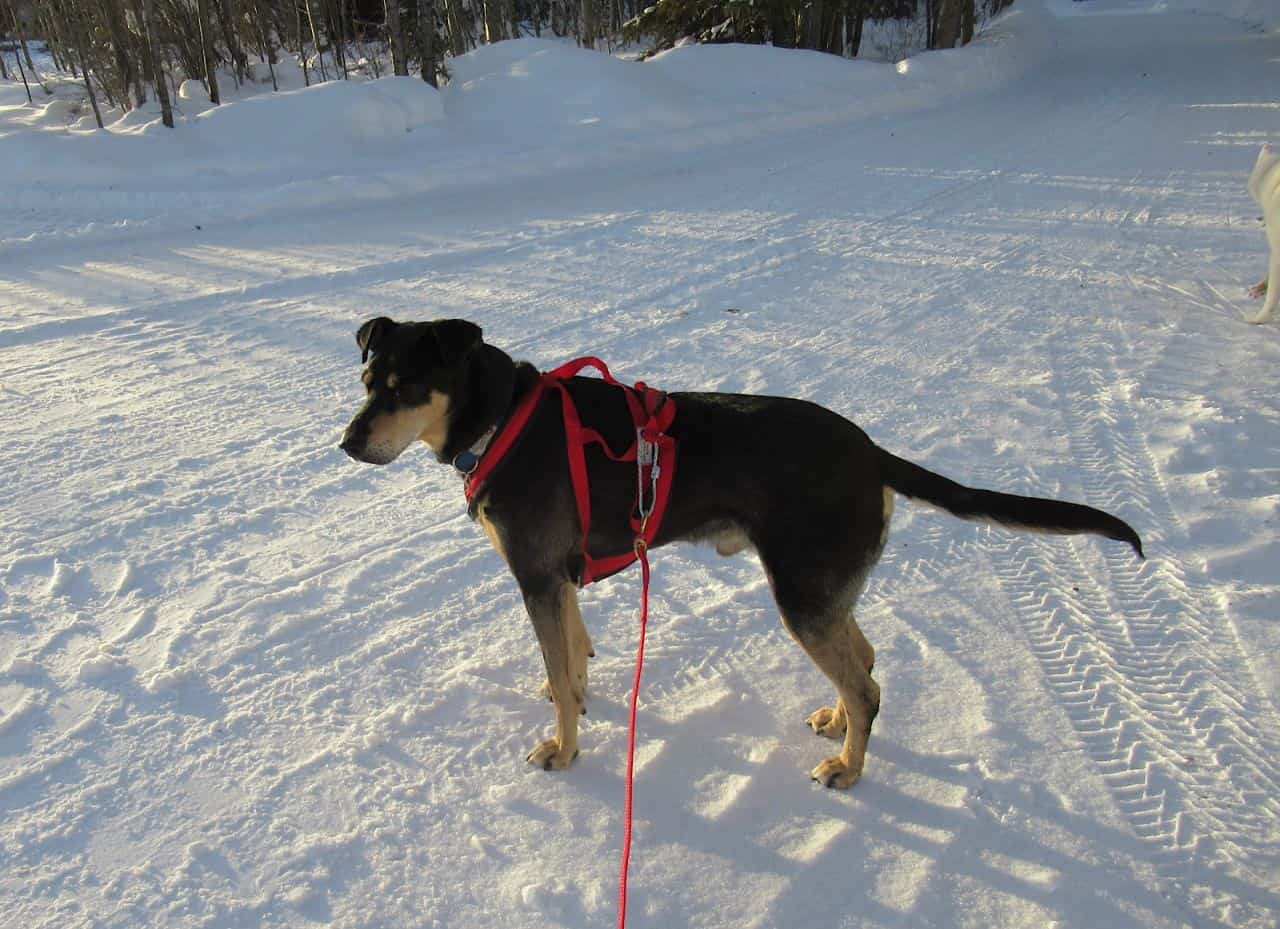 Skijoring in the Yukon with Lungo. (Photo Credit: Megan Kopp) 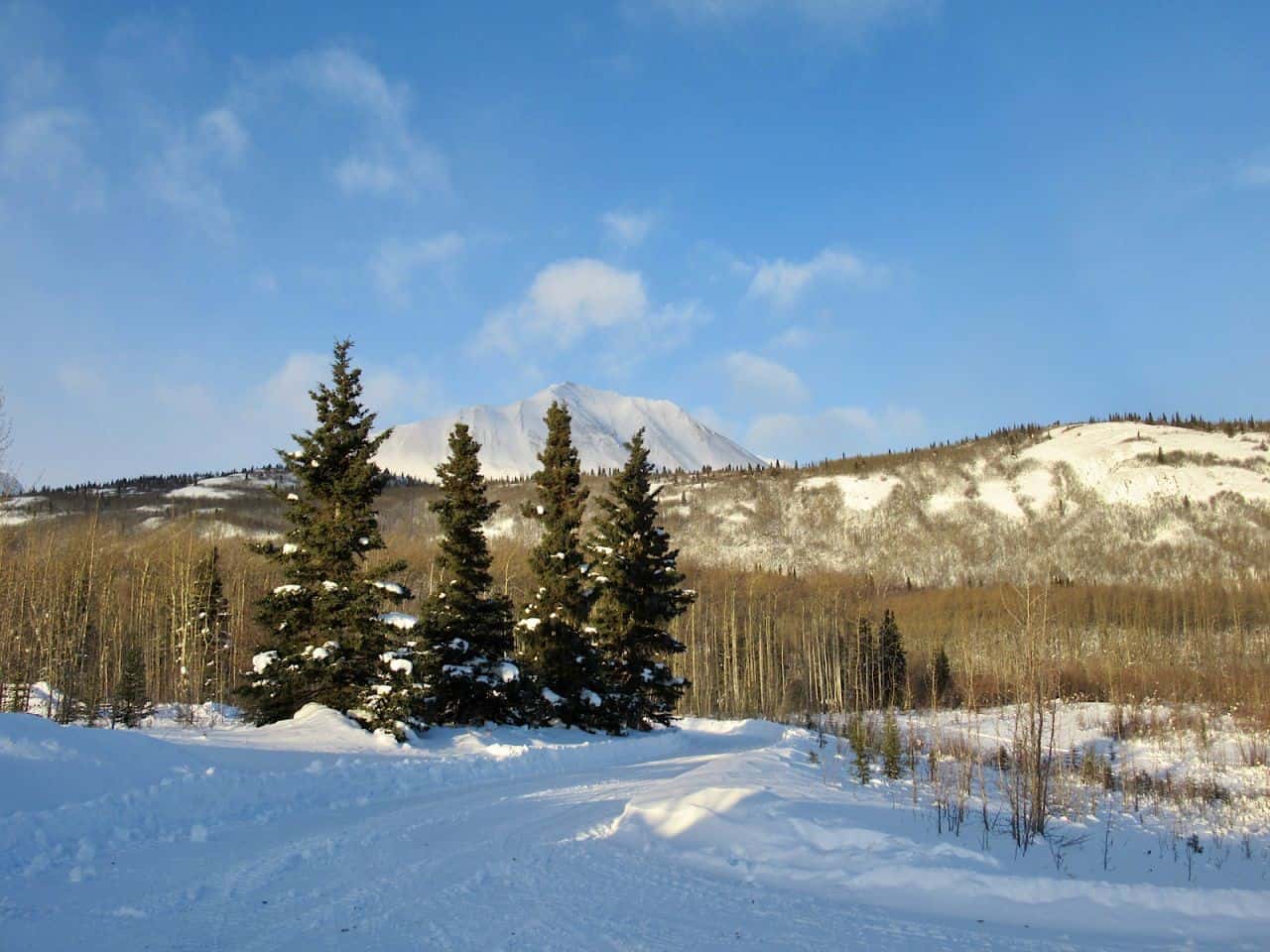 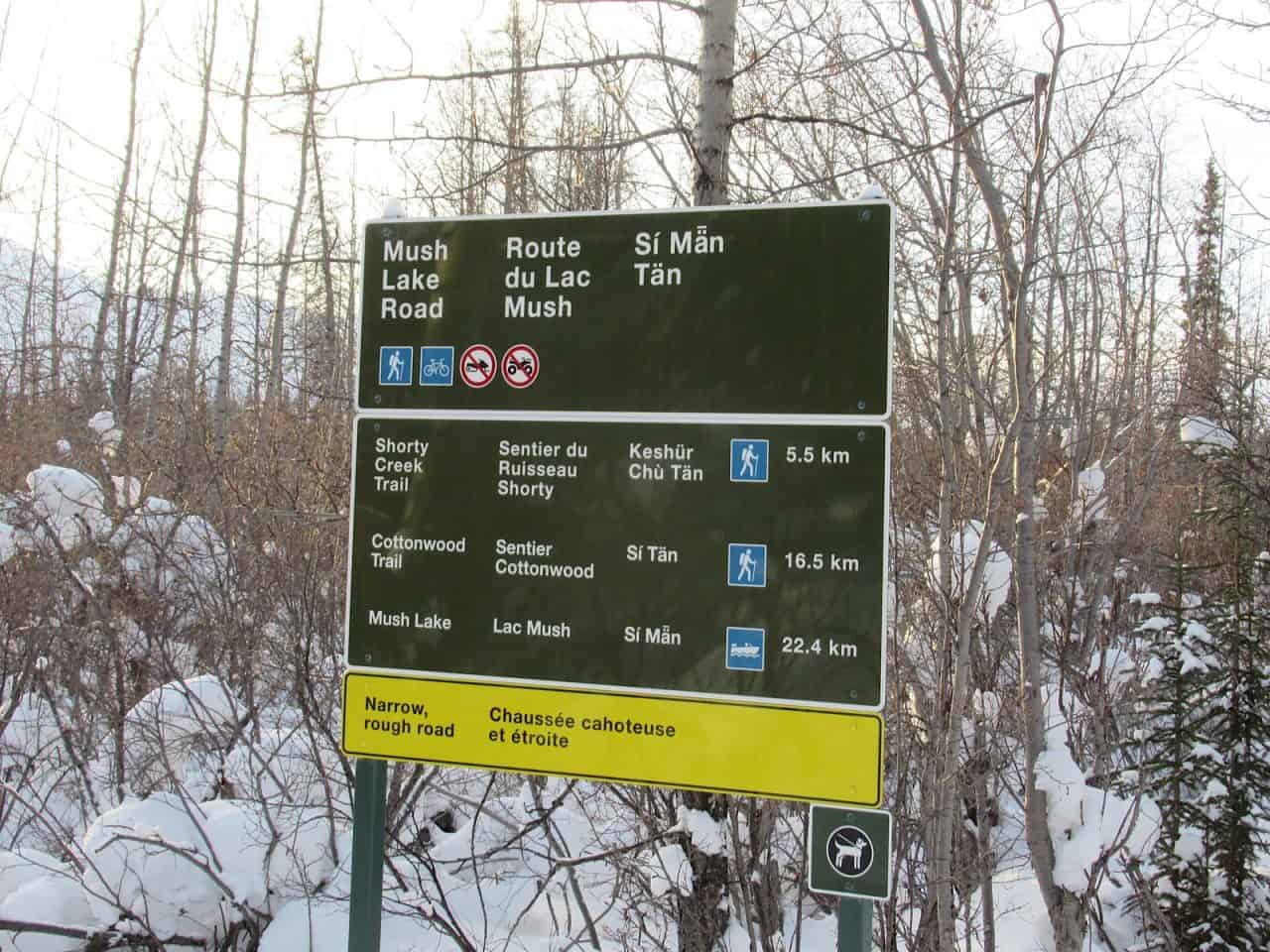 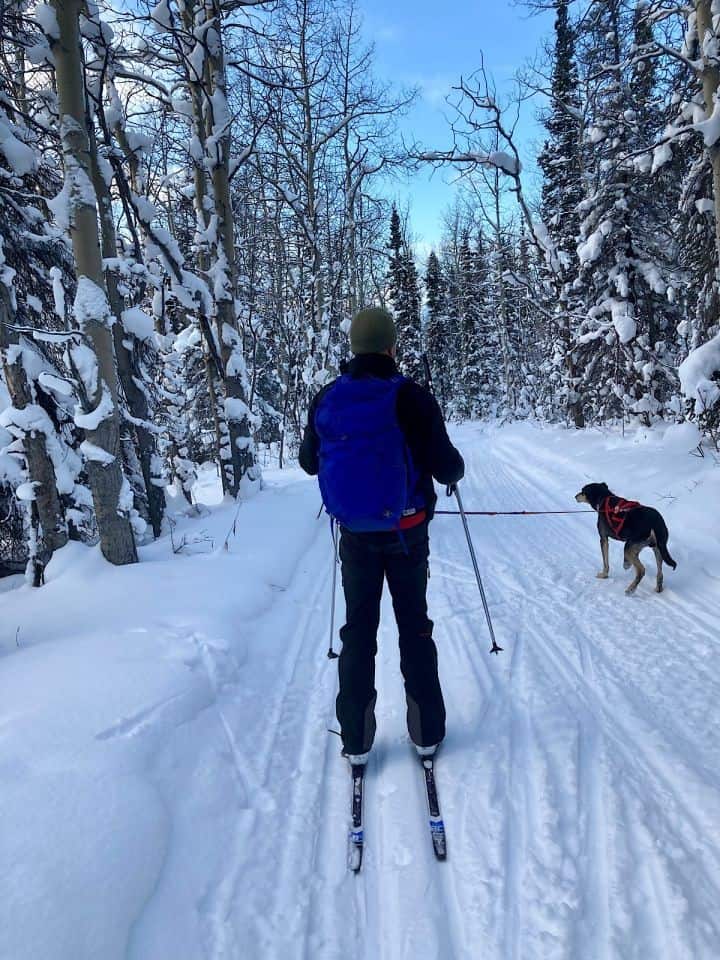 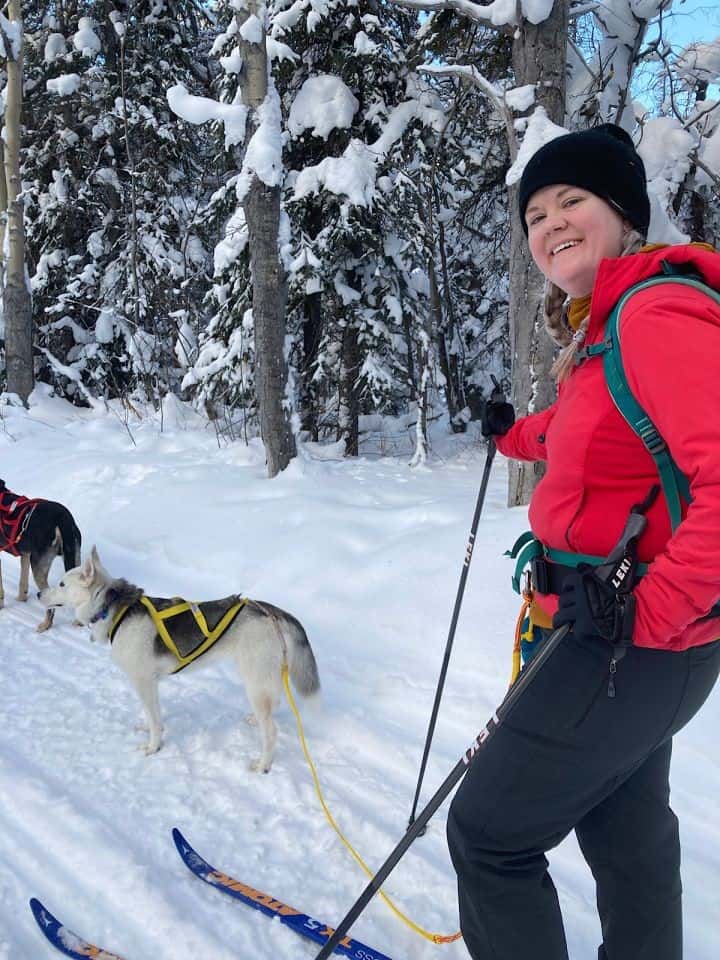 What exactly is dog skijoring in the Yukon Canada - and why do people do it?

In the Yukon, dogs are the champion pullers. Unlike dogsledding, skijoring only requires one dog with a desire to run and pull. It's a great way for dogs and their owners to get a little exercise and have a ton of fun doing it.

Although any large, energetic breed of dog is capable of becoming a skijoring partner, huskies and malamutes are traditional faves. As luck would have it, our daughter and her guy have two retired sled dogs – one of which is an Alaskan husky – as well as all the necessary gear for both canines and their owners to get out and enjoy this unique winter adventure. They couldn't wait for us to fly up to the Yukon Canada and join them for a skijor.

The Whitehorse Cross Country Ski Club welcomes dogs on designated trails in their system at Mount McIntyre. About one-third of the 1300 club members ski with their dogs. Day users also use the trails and many of these people also have dogs. D-skiing is popular!

There is parking available at the Mt. McIntyre Recreation Centre – aka the Dog Barking Lot. We parked in the Dog/Sundog Parking lot off Hamilton Boulevard. As we pulled in, I was relieved to see only a handful of trucks and cars.

Boots on and skis waxed, we brought Lungo and Lumi and their buddy Adanac out of the backseat of the truck. All three dogs were sporting their special X-backed skijoring harnesses.

Watching as the other three skiers put on skijoring belts, I was quite happy to ski alongside and take photos. I'm an avid xc skier, but not usually fond of speed. As they took off and left me in the snowdust, I couldn't help but smile. Oh yeah, I was going to have to give this adventure a go.

Skijoring with a Retired Sled Dog

Strapping the belt low on my hips, I was slow to clip into Lungo's harness, but he stood patiently as I readied myself. Lungo's an old pro when it comes to running. He actually raced the Yukon Quest twice in his dogsledding career. And at 11, this pup is still 75 pounds of rock-solid muscle.

The roughly 8-ft long skijoring line has a built-in bungee section which absorbs the shock when you start out – or if you fall. It also has a quick release in case of emergency. Not going to need that… haha!

And we're off, down the trail slowly at first and then picking up speed. Before I know it, we're down Dog Trail and up at the cabin. The groomed and trackset dog trails at Mt. McIntyre are fantastic. The fourth dog-less skier finally catches up. I cannot wipe the grin from my face. I'm in the lead and it is a blast!

Heading down Lower Valley I'm getting so relaxed that I start to look around appreciate the winter scenery and snap a photo or two – and that's when one pole dangled a little too close to a ski. Bang, I'm down. Lungo stops to stare at me. It's like he can't believe I fell! I can't help but laugh as the rest catch up and we head off to Upper Valley and home via Sundog.

Hooked, we readily agree to a road trip to check out another trail in Kluane National Park. The drive from Whitehorse to Haines Junction is simply beautiful with winter sunshine peeking out from behind the clouds. Naturally, the Alaska Highway is quiet this time of year.

Haines Junction is mostly shuttered with only a few hardy souls around and fewer businesses open as we drive through. Heading south past Kathleen Lake, we watched a fatbiker braving the wind on Dezadeash Lake - and then we've arrived.

The Mush Lake Road ski trail is a volunteer-groomed route. While it is over an hour and half drive from Whitehorse to the Mush Lake trailhead, you can expect incredible mountain scenery a lack of crowds and a little slice of skijor heaven. Mush on! 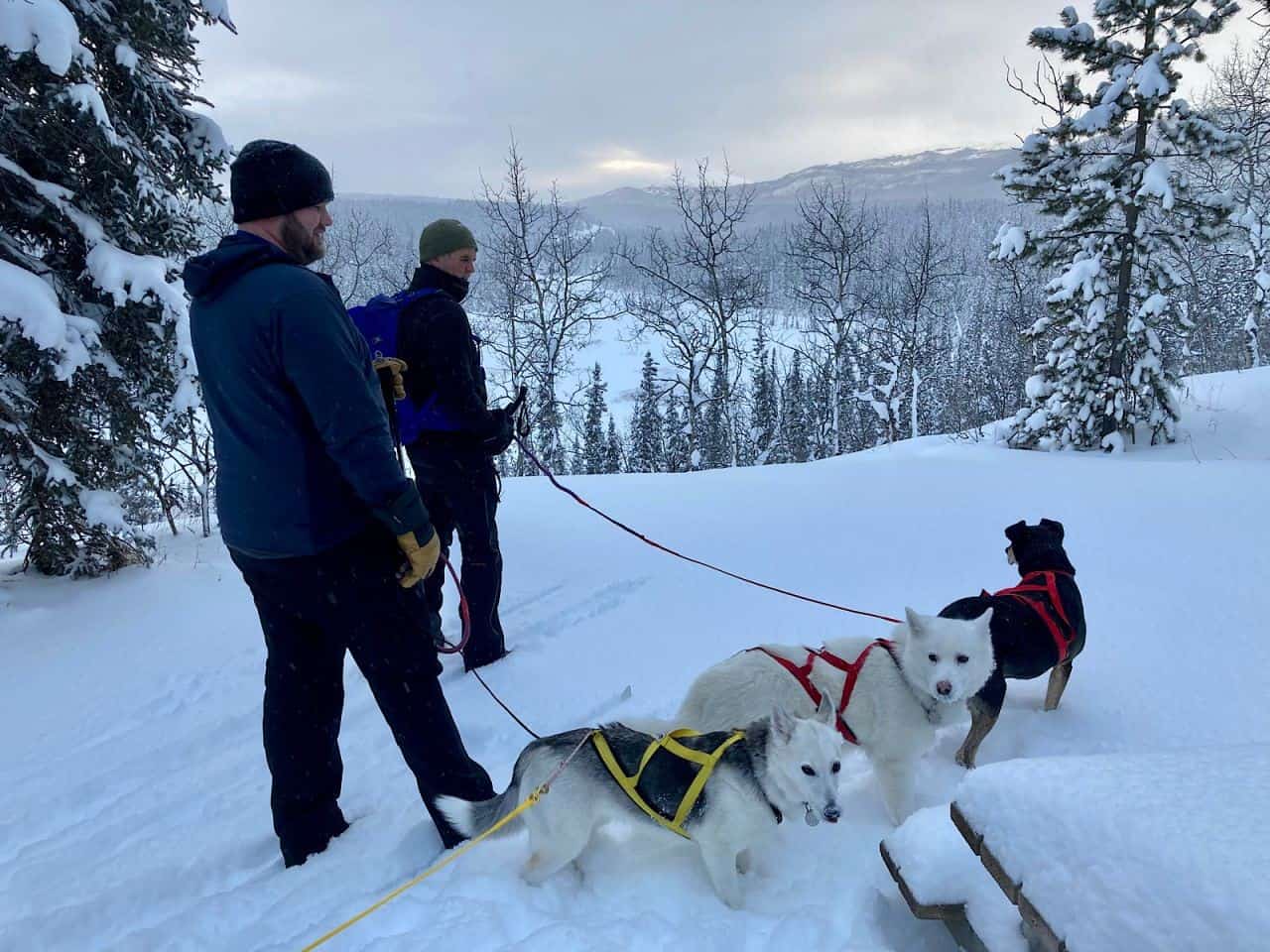 It's a perfect day for a skijor adventure in Whitehorse, Yukon! (Photo Credit: Megan Kopp) 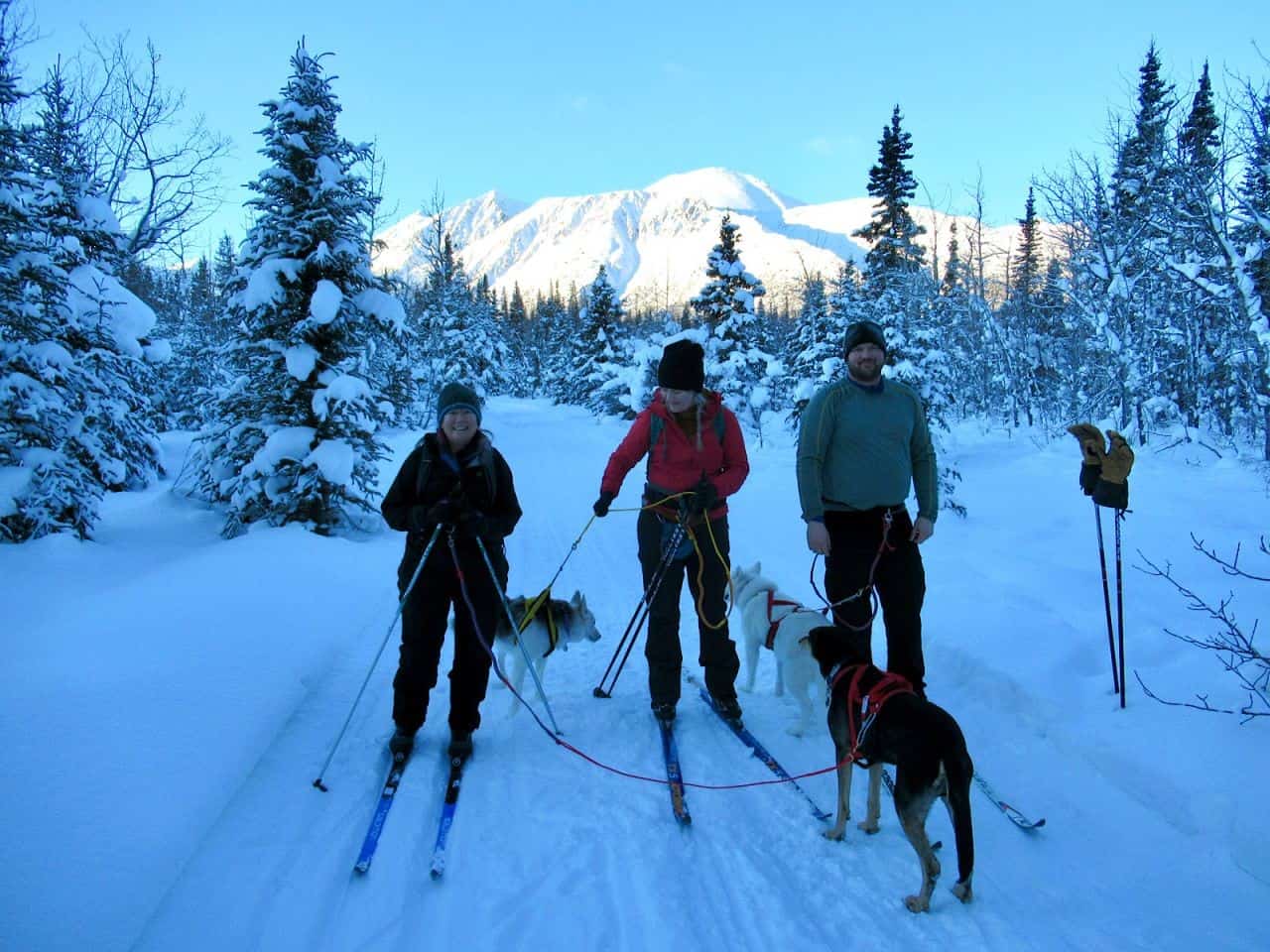 Skijoring in the Yukon is too much fun! (Photo Credit: Brad Kopp)

If you don't have Yukon family with their own dogs and skijoring gear, check out Yukon Skijor & Bikejor. They are the "Yukon's only company offering skijoring, bikejoring and fat bikejoring lessons, clinics and tours." Contact them to book your advenJOR!

The Yukon Dog Mushers Association maintain the Ibex Valley trails about 30 minutes northwest of Whitehorse. These trails can be used for skijoring by members.

Skijoring in the Yukon!

Skijoring ...Wow who knew.
Only requires one dog with a desire to run and pull. It's a great way for dogs and their owners to get a little exercise and have a ton of fun doing it.

Love it Megan Copp!
Thanks for the education!

0 Cancel Reply
[b]Skijoring[/b] ...Wow who knew. :o Only requires one dog with a desire to run and pull. It's a great way for dogs and their owners to get a little exercise and have a ton of fun doing it. :p Love it Megan Copp! Thanks for the education!
Cancel Update Comment

So enjoyed this Yukon story. Brought back memories. Still have not seen Northern Lights, can you believe it?

0 Cancel Reply
So enjoyed this Yukon story. Brought back memories. Still have not seen Northern Lights, can you believe it?
Cancel Update Comment

One day the night sky will dance and you will never forget it!

0 Cancel Reply
One day the night sky will dance and you will never forget it!
Cancel Update Comment

Eh Canada Travel Cannot believe it - sounds like you need to spend some time in the North!

0 Cancel Reply
Eh Canada Travel Cannot believe it - sounds like you need to spend some time in the North!
Cancel Update Comment

Megan Kopp Yup... we could use some Yukon love. 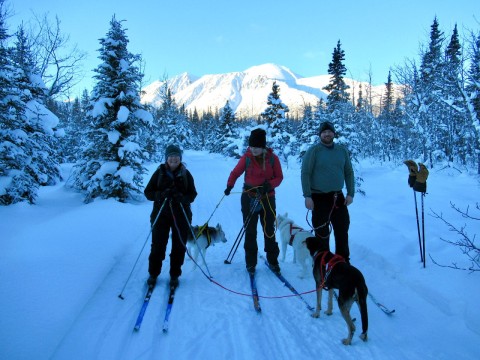 Essential Gear for Birdwatching for Beginners