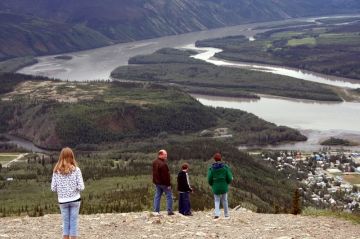 The Midnight Dome Lookout is a sightseeing destination high above the community of Dawson City, Yukon Territory, Canada. It is called the Midnight Dome because for decades people have gathered on the top of the hill to watch the midnight sun and the changing colors of the night sky.

The first recorded group to gather on the Midnight Dome to watch the midnight sun was in 1899. The occasion was a catered event with entertainment. There were candies, cigars and drinks. And for entertainment the group invited a poet by the name of Captain Jack Crawford to recite some poems from his collection.

Unfortunately, the groups timing was off as the sun set 1/2 an hour before midnight - only to rise again 2 hours later. In 1925 a road was built leading up to the dome so to provide quicker access for tourists arriving from the riverboats visiting Dawson City.

Today.. the Midnight Dome is a very popular sightseeing destination in Dawson City. The views are far reaching and easily enjoyed. From the top one can see the Yukon, River, Klondike Valley, Bonanza Creek, Top of the World Highway and the Ogilvie Mountains.

The Midnight Dome is a metamorphic rock standing at 887 metres (2911 feet). There is a paved road and hiking trail leading up to the top of the Midnight Dome where there is a paved parking lot and a lookout. The road at the top is a loop route circling around a large rock mound before heading back down the hill.

The sightseeing lookout area is well developed and maintained. A short hiking trail leads to a large wooden lookout perched on the edge of a rocky bluff. Throughout the area are a few interpretive signs, sitting benches and some pit toilets.

In the middle of the loop paved road is a large rock mound (it is the highest point on the hill). On the peak of the rock mound is a large, carved wooden bench. From the the bench there are 360 degree views of the region. And, as an added touch, there are words carved into the bench, " Life is the World" .

Hiking, sightseeing and picnicking are a few activities enjoyed on the Midnight Dome. But, did you know, that the Midnight Dome is also a launching point for para gliders. Maybe on your visit you will see humans fly. 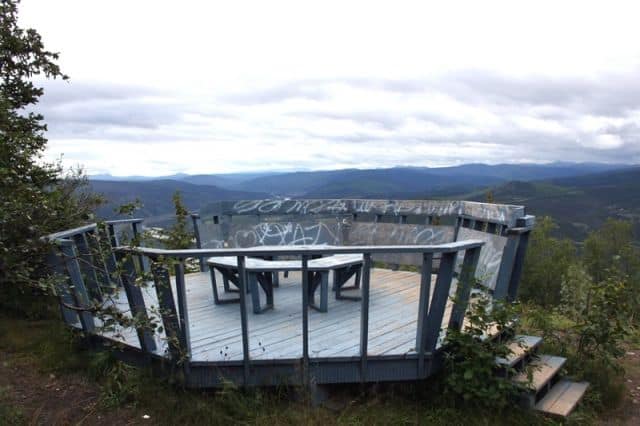 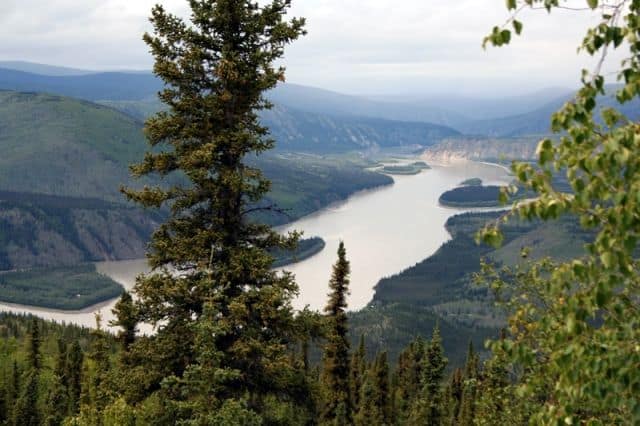