The North of Superior, Ontario, Canada region is located in the central part of Northern Ontario. The northern half of the region is groomed for rugged and remote wilderness adventures and the southern half is home to most of the communities and the largest freshwater lake in the world - an inland sea - called Lake Superior.

The northern shoreline of Lake Superior is the southern boundary of the region. The 900+ kilometre stretch of coastline is explored by a sightseeing highway called the Lake Superior Circle Tour. The route follows the coastline visiting with viewpoints, rocky cliffs, sandy beaches, historic sites, waterfalls, marinas, parks, trails and communities. 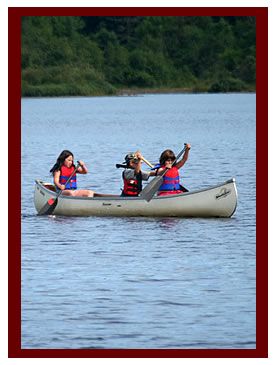 The communities with many of the services catering to travelers in the North of Superior region include Armstrong, Hearst, Manitouwadge, Marathon, Nipigon, Terrace Bay and Thunder Bay, Ontario.

The guides and tours in the region provide expertise, equipment, transportation, maps, meals and accommodations. There are fishing lodges, outposts, outfitter camps, wilderness resorts, cottages and all types of lodgings. And... lodging transportation may include a boat, floatplane, bush plane and/or a 4x4 vehicle.

The backcountry boreal forests, lakes and rivers... and the maintained wilderness parks provide so many adventures. These same connecting waterways were once the transportation routes used by the Ojibway and Anishinabe First Nation people for hunting, fishing and war. Their stories are told through the rock paintings (pictographs) scrawled into some of the cliffs on Lake Superior.

During the winter months - after the snow has fallen and the waterways have frozen over - the backcountry gravel roads, trails and waterways support activities like snowshoeing, ice climbing, ice fishing, xc skiing, downhill skiing, snowboarding, dog sledding and snowmobiling.

The region maintains an extensive snowmobile trail system for day and overnight rides. It is part of a province-wide northern snowmobile trail network. Many long-haul routes are serviced with gas stops, restaurants and access to accommodations.

Some of the government parks in the region, as well as, the local alpine and nordic clubs in most communities maintain a network of xc skiing trails.

Plan Adventure Travel in the North of Superior Region of Ontario.