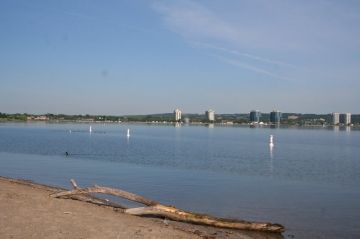 Minet's Point in Barrie, Ontario, Canada is a sandy beach park and picnic area located on the southern shore of Kempenfelt Bay on Lake Simcoe.

The beach park is a short walk from the southern terminus of the Waterfront Trail. Being that it is off the popular paved and boardwalk trail, Minet's Point tends to be less crowded and away from the sometimes chaotic marine activity.

The park is treed with sections of shade and there are, also, open areas for those who wish to embrace the warmth of the sun.

The choice of shade or sun is a positive as there is a small sandy beach, large grass lawns and a playground area for those who wish to spend some time at Minet's Point.

From the park there are wide ranging views of Lake Simcoe, the City of Barrie skyline and boats exploring the waters of Kempenfelt Bay.

The activities enjoyed in the park include swimming, sun tanning, picnicking and sightseeing.

The amenities in the mark include a day use picnic area, sightseeing benches, washrooms, playground and a large paved parking lot. There is no lifeguard in the park.