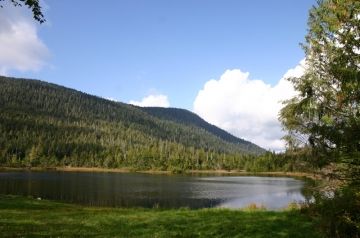 Oliver Lake Park and Trail in Prince Rupert, British Columbia, Canada is a peaceful, serene environment, naturally left on its own, south of the community. The park was named after John Oliver, who served as Premier of BC from 1918-1927.

Oliver Lake is home to the exotic Bonsai Tree reported to be over 125 years old. These are trees stunted by climate... bent and twisted by the seasons and poor soil. From the parking lot a gravel trail leads to the picnic tables, the lakefront and to the trailhead of the Oliver Lake Dwarf Forest Trail.

The area is a popular destination for hikers, but also for wildlife. Visiting Oliver Lake and hiking the Dwarf Forest Trail provides a good opportunity to view Bald Eagles and Ravens. Also living in the area but are harder to catch a glimpse of are Black Bears, Wolves, Porcupines and Beavers.

The trail interpretive sign in the parking lot highlights the historical importance of the land to the First Nation People. Much of the land, at one time, was used for medicinal purposes such as cultivating plants like Labrador Tea, Sphagnum Moss and Sundew.