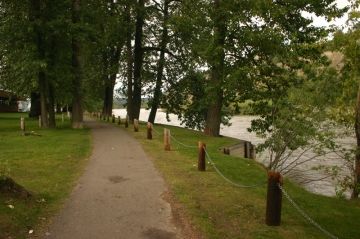 Heritage River Trails in Prince George, British Columbia, Canada follow the shores of the Nechako and Fraser Rivers. The trail is used most by the locals for recreation and community transportation. The 11 kilometre route connects the community and all of the riverside parks plus provides an interpretive tour of the regions history.

Walkers, bikers, joggers and roller bladders enjoy the trail route in the summer. In the winter, after the snow falls, the trail is used by xc skiers and snowshoers. From the Cameron Street Bridge to Cottonwood Island Park the trail follows the Nechako River. From Cottonwood to Carrie Jane Gray Park the route follows the Fraser River. The rivers merge in Cottonwood Park.

The interpretive signs on the trail provide a brief look into the heritage sites found along the trail. Prior to the Heritage Trail the pre glacial banks were home to settlements. First by the First Nation people and then by the settlers.

The information posted on the interpretive signs covers the history of some of the early pioneers, details about how the early settlers managed to cross the river, the end result of the ice age, origins of the community of Island Cache, and the trails and tribulations of Mackenzie's famous journey and First Nation history.

The Railway Museum and the First Nation Cemetery located on the route provides a brief look into the history of the area. McMillan Creek Park, Kiwanis Park, Cottonwood Island Park, LC Gunn Park, Lheidli T'enneh and Carrie Jane Park are all connected by the trail and provide a good sampling of the natural environment of the area.

The entire trail is spotted with viewing benches and viewing platforms. Many are strategically placed in parks to capture some of the best views. There is also opportunity for bird watching at the Hudson Bay Slough and on the Nechako and Fraser Rivers.. plus there is an opportunity to view fish spawning at the local fish hatchery near River Road.

The trail enjoys many of the amenities important to visitors because it connects to so many parks. Depending on where you are on the trail and which park you are visiting will determine the availability of picnic tables, picnic shelters, playgrounds, viewing benches, washrooms, BBQ pits and more.

How To Get ToHeritage River Trails

:
How to Get Here: This trail can be accessed from almost anywhere along the Fraser and Nechako Rivers in the community of Prince George, BC, Canada. But for parking, the best access points to the trail can be found in the parks.