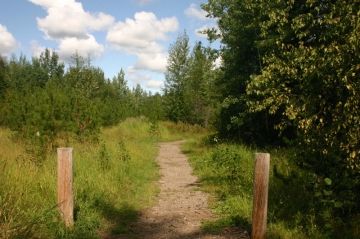 Moores Meadow in Prince George, British Columbia, Canada is a network of trails spanning over 5 kilometres exploring a mish-mash of trees, shrubs and wildlife located in the community.

The trail system is a year round destination visited by many outdoor enthusiasts. In the spring, summer and fall the trail is a rainbow of colors explored by many on foot or bike. In the winter it is a popular destination for cross country skiers and snowshoers.

The wood chip and earthy paths in the Moores Meadow Park explore a large glacial kettle that formed after the ice age thousands of years ago. The entire park area covers over 60 hectares (150 acres) and is best explored via four loop trails circling the meadow. The trails include the Mary Fallis, Ridge, Kettle and East Trails.

The park is named after an adventurer named Charles W. Moore. A hearty fellow who arrived in the Prince George region on a dog sled in 1906. After he passed away the meadow was neglected for years and it was not until 1976 when the community placed the park under their care that it officially made it a nature park.

The park is a demonstration wilderness garden and the trails provide the only access to the many different eco systems within the park. The various cluster of trees in the park vary depending on the hiking route taken. There are Lodgepole Pine, Western White Spruce, Black Spruce, Douglas Fir, Northern Black Cottonwood, Trembling Aspen, Mountain Alder and Sitka Spruce trees growing throughout the park.

Look closely at the under brush while exploring the trails. Some of the shrubs you might be able to point out along the trails include Saskatoons, Black Twinberries and Kinnikinnicks. The natural state of the park is inviting also for wildlife. Moose, Mule deer, Red Foxes and Coyotes have been spotted exploring in the park.

Bird watchers will also be pleased to note that the forest is also inviting for many bird species also like Bald Eagles, Red Tail Hawks, Great Horned Owls, Hairy and Downy Woodpeckers.

From the main parking lot there is a trail map and information about the park. The parking lot is also home to an outhouse.