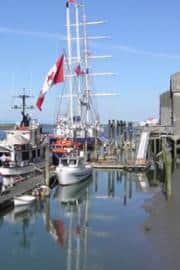 Britannia Heritage Shipyard is a National Historic Site situated on the waterfront in Steveston Landing located southwest of the City of Richmond, in Metro Vancouver, British Columbia, Canada. The building was built on the banks of the Fraser River.

Steveston Landing was once a fully operational fishing village in the early 1800s. The Britannia Heritage Shipyard operated from 1917 to 1980. It was a premier boat building and restoration facility in its day.

In the late 1900s over fishing and new government regulations forced the ship yard to close shop. The waterfront known as Steveston Landing was soon later protected and developed as a tourism destination and Vancouver historic site. Today the Vancouver, British Columbia site is home to some of the oldest dwellings on the Fraser River.

The Britannia Heritage Shipyard is one of the main attractions on the Vancouver waterfront providing demonstrations and displays featuring boat restoration, boat building, historic artifacts, interpretive signs and staff.

The Steveston Landing Greenway is a 1 kilometre wooden pier built on stilts acting as a sightseeing pathway connecting one historic site to another. The wooden pier connects the Britannia Heritage Shipyard to the Gulf of Georgia Cannery. The pathway is decorated with fine dining establishments, patio restaurants and gift shops.

On the east end of the shipyard are some historic buildings called stilt houses. The buildings compliment the Britannia Heritage Shipyard attraction as mini museums with artifacts. displays and ongoing exhibits. They include the the Murakami House (information centre) and the Chinese, Japanese and First Nation Bunk Houses.