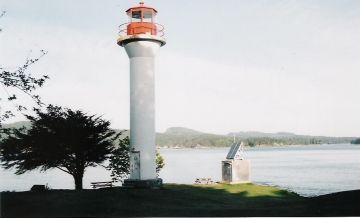 Georgina Point is a day use park located on the northern tip of Mayne Island, BC. Mayne Island is part of the Southern Gulf Islands Group situated on the west coast of British Columbia. The highlight of the park are the ocean views, marine activity and a lighthouse.

Georgina Point is part of the Gulf Islands National Park Reserve. It is a protected rocky headland sandwiched in between two ocean bays - Maude Bay on the left and Oyster Bay on the right. In front, the park rests at the doorstep of Active Pass. The pass is a popular ocean route running in between Galiano and Mayne Islands.

The lighthouse is no longer manned, but still dominates the point. The tall marine light station, complimented by a Canadian flag, was built in 1885 to warn ships of the incoming sharp reefs and rough waters of Active Pass. Now the lighthouse is a symbol of marine life on the westcoast and a protected landmark .

Georgina Park is a day use park that attracts activities like picnicking and sightseeing. There is a small grass area and picnic tables for picnicking. Pit toilets are onsite. There are no trails but many explore the headland anyway. Best time to explore is at low tides when the ocean tides recede revealing tidal pools of marine life.

From Georgina Point there may be opportunities to view wildlife. Some of the wildlife might include seals, eagles, sea gulls, sea lions, herons, otters and, if you are lucky, whales.