The Tidal Flats | Estuary in Bella Coola, British Columbia, Canada of the Central Coast Region is a natural wildlife estuary located west of the community of Bella Coola and east of the BC Ferry Terminal. The estuary rests where the Bella Coola River and the ocean tides of the North Bentinck Arm converge therefore, at low tides, large slivers of sand flats and exposed reeds are revealed.

The estuary is an ideal home for waterfowl and predator birds. Some birds call the Tidal Flats home while others stay to rest during migration. Some of the birds to look out for when birdwatching at the Tidal Flats include Canada Geese, Bald Eagles, Barrow's Goldeneyes, Buffleheads, Mallard Ducks, American Wigeons and Trumpeter Swans.

The Tidal Flats is easily viewed from the main road leading to the BC Ferry Terminal right before the government wharf. When driving the main road to the flats there is a viewing bench located beside a large boulder for your wildlife viewing pleasure. On the opposite side of the flats is the Bachelor Bay Hiking Trail which provides an alternative view of the estuary.

On the boulder is a plaque in memory of Alexander Mackenzie. It was here that MacKenzie completed his journey across Canada in 1793. Alexander MacKenzie was an explorer and fur trader for the North West Company and the first European to complete the journey.

Listen closely when at the plaque and viewing bench for a waterfall. just across the street hidden behind some tree cover (not visible from the road on our visit) is a little enclave and a small waterfall. The locals call it the Wishing Well. 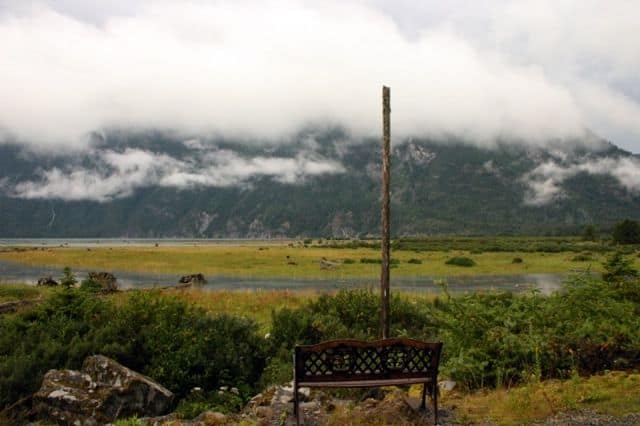