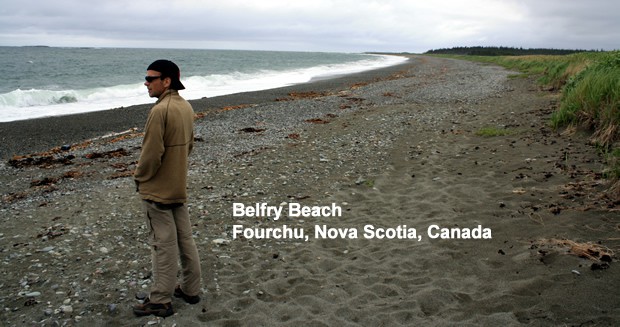 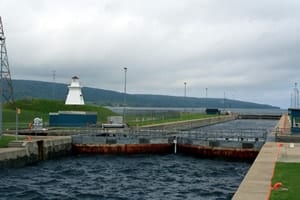 Crossing the Canso Causeway from the Nova Scotia mainland onto Cape Breton Island we were greeted with clouds, rain and a spattering of thunder and peek-a-boo blue skies… the mixed bag of weather created some sunshine hot spots and some damp shade cover but, in no way, did it damper our enthusiasm for adventure. Canada is fortunate to enjoy all-weather scenery which often creates award winning photography and – once in awhile – twin rainbows on the horizon.

From the town of Port Hawksbury we traveled along the shores of a salt water lake named Bras d’Or Lake located in the centre of the island. Driving the low lying shores and birds-eye cliffs we enjoyed views of sailboats skirting along the rolling white-cap waters.

We decided to set up base camp in the centre of the island so to be accessible to all our planned adventures for researching Cape Breton Island. 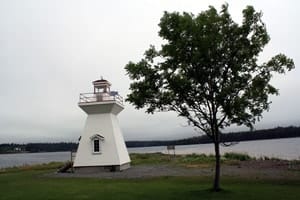 The next few days called for rain… so I geared up in my rain gear and set out for the southern tip of Cape Breton Island to research the fishing villages and lobster boats on Isle Madame. The small island, connected by a long spit and draw bridge, is an island with a long Acadian history. It was time to bone-up on my French again.

After many wrong turns, u-turns and dead end roads I made my way to Pondville Beach, the Cape Auget Trail and the Martinique Lighthouse Park. The sprinkle of rain and the sporadic gusts of wind continually pummeled me and the shorelines with a smattering of waves spitting salt water mists high up into the air. Nature at its moodiness made for some great self reflecting moments and pictures. 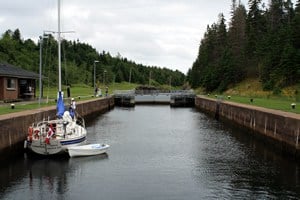 Leaving Isle Madame the clouds and winds settled down for a quick nap releasing the blue hues of summer. I took the opportunity to shed some layers of clothes (always layer clothing when exploring) and enjoy some sunshine blues while visiting the Historic St. Peters Canal and the lighthouse on the high cliffs in Battery Park. The canal connects the Atlantic Ocean with the Bras d’Or Lake. Prior to the construction of the 1869 historic canal the Mi’kmaq First Nation people use to portage the isthmus for hunting and fishing.

The winds soon returned whispering to me that a visit to the rolling swells and the surfing paradise of Port Michaud Beach was in the cards. The long white sandy beach was erupting with activity… however not human but natural. The waves rolled in, one after the other, daring surfers to engage but none were there on this day… just me dissecting the winds under the watchful eye of some surfing instructors huddled together on the beach. My vivid imagination ran wild with visualizations of surfers and what ifs. 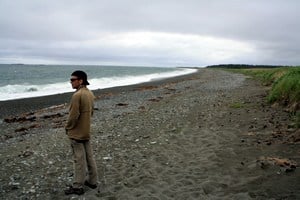 The next few days we ventured into the unknown regions of Cape Breton Island seeking beaches and parks traveling back country roads looking for hidden adventure treasures. Belfry Beach proved that finding the local treasures is not an easy task. No signs and no directions again challenged our adventure radar often wandering if the locals did not want to share their white sandy paradise. Determination and allot of guess work led us to the village of Forchu and the shores of Belfry Beach. We walked the beach, the winds entertaining, to ensure the effort was enjoyed to its fullest. 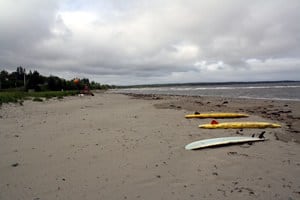 Another hidden gem on the eastern shore of Cape Breton Island which we will be sharing with you on our NovaScotiaEH.ca website is the boardwalk paths, lookouts and viewpoints on the Main-a-Dieu Beach. Not registered on any travel information – this beach is a true gem. There are endless boardwalk paths navigating grassy knolls and sand dunes leading to lookout decks and viewing platforms providing access to a long white sandy beach.

Down the road we bumped into the Mira Gut Beach. This is a beach we had written off as we could not locate it at first. By accident the beach revealed itself traveling the little used Lighthouse Route near Mira. The beach ended the tour on a high note and the day seemed complete with smiles and dreams of beach adventures to come.