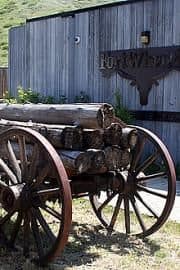 Indian Battle Park is a historic destination and a sightseeing attraction situated on the shores of the Oldman River located in the City of Lethbridge, Alberta in the southern region of Alberta, Canada.

The name of the park commemorates the 1870 battle between the Blackfoot and Cree First Nation peoples. A bloody battle which took place among the coulees on the west side of the Oldman River.

Established in 1960, the Indian Battle Park is also a recreation destination for activities like jogging, picnicking, roller blading, biking and walking.

The Fort Whoop-Up Historic Site provides an inside look into the lives of the early pioneers who first settled in the region. The fort was originally built by Montana fur traders who arrived in the region in pursuit of the buffalo.

This Lethbridge, Alberta fort was first known as Fort Hamilton. It had a reputation for being a rough and tough place to do business. To make matters worse - whiskey was introduced to the region as a trading tool.

The introduction of whiskey contributed to the lawlessness of the region in a big way. So much so, that the NWMP (North West Mounted Police) arrived in 1873 in an effort to control the whiskey trade, as well as, protect Canadian sovereignty.

In 1875 the NWMP set up their headquarters within the walls of Fort Whoop-Up. The police operated a building which they rented back from the fur traders. Much of the history of the era has been preserved and is on display behind the giant walls of the fort.

Some of the services available to visitors in this Lethbridge, Alberta fort include a gift shop, concession, washrooms and the Warren Crowshoe, Shockley Firearms and Thunder Chief Galleries.

The trails in the Indian Battle Park are part of the Coal Banks Trail system which connects to other parks in the immediate area like the Lethbridge Nature Reserve, Botterill Bottom Park, Bull Trail Park, and the Elizabeth Hall Wetlands.