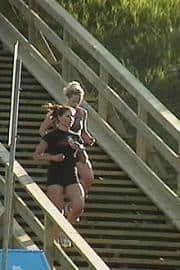 The River Valley region is a collection of community parks, recreation trails, attractions and adventure destinations located along the banks of the North Saskatchewan River in the community of Edmonton, in the Central Alberta region of Canada.

The collection of parks and urban forests cover over 7400 hectares of land, measuring over 25 kilometres long. The valley of forest and parks is recognized as the largest continuous parkland in Canada.

There are over 22 parks, 11 lakes and 14 ravines located along the North Saskatchewan River and all are connected by a network of 150+ kilometres of community recreation trails. The trails located north of the river are mostly paved trails while the south are mostly gravel and chip wood trails.

There are many parks and recreation areas in the North Saskatchewan River Valley connected by the trail network. The parks include picnic parks, event sites with bandshells, golf courses, off leash dog parks, playground parks, ski hill parks and campground parks.

The trail network is a popular year round adventure and activity destination for many living and visiting in Edmonton. During the summer months some of the activities enjoyed on the trails include hiking, walking, biking, picnicking, rollerblading, sightseeing, dog walking and jogging.

During the winter months, after the snow has fallen, some sections of the trail network become cross country ski routes and snowshoe destinations. Some of the lakes become skating rinks and 2 of the hills in the river valley become community ski hills.

How To Get ToNorth Saskatchewan River Valley

edmonton_river_valley_091807_0013
PreviousNext
No reviews yet for North Saskatchewan River Valley.