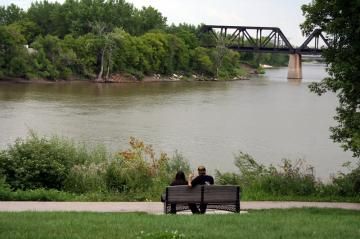 Stephen Juba Park is a community memorial park dedicated to a long running mayor of the City of Winnipeg. Stephen Juba was a popular mayor who occupied the top seat of the community from 1957 to 1959 and from 1960 to 1977.

The community park is a green space park located on the western banks of the Red River. The linear park connects Downtown Winnipeg to the Historic Exchange District.

The parkland provides some views of the river and activity. Certain viewing areas in the park provide an opportunity for birdwatching (mostly waterfowl and song birds) and maybe, even, catching a glimpse of a kayak, canoe or boat tour.

There are bike and walking pathways which explore the park. The pathway is part of the riverwalk trail system which follows the Red and Assiniboine Rivers. The paths are paved and level suitable for baby strollers and wheelchairs.

Central in the park is the Stephen Juba Memorial. It has been located in the the centre of the park near Bannatyne Avenue since 1983.

How To Get ToStephen Juba Park

stephen-juda-pic
PreviousNext
No reviews yet for Stephen Juba Park.