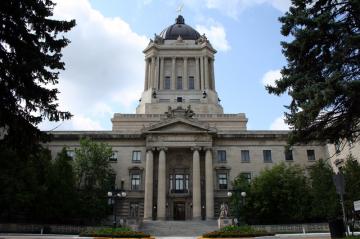 Winnipeg is the Capital City of Manitoba, Canada. The Manitoba Legislative Building, home to the Provincial Government of Manitoba, is located in the City of Winnipeg on the banks of the Assiniboine River.

The Manitoba Legislative Building share the same grounds as Government House. Government House is the official residence of the Lieutenant- Governor of Manitoba. The 1883 building was the first home to Louis Riel - a historic Metis First Nation figure in Manitoba history - who dates back to 1869 when he was the President of the Provisional Government of Red River.

On the Assiniboine River side of the Manitoba Legislative Building are some great river views and a historic statue. Near the statue of Louis Riel is a water fountain. Louie Riel was a leader for the First Nation Metis people back in the day. He took up action against the government who were about to take possession of traditional lands which belonged to the Metis people. Riel created a militia in 1869 and took control of Fort Garry and started the Red River Resistance fighting for the rights of the Metis people.

Both buildings are located on the same grounds decorated with beautiful flower gardens and maintained lawns. Connecting the government buildings, riverfront and the floral gardens are a series of paved pathways.

The pathway leads to a family of bear figures, statues, totem pole, monuments and sitting benches. The bear figures are painted in lively colours.. They are large and sitting in all types of positions posing for pictures. There are bears painted in themes, some in soft hues while others are loud, artsy and painted in rainbow colors.

The river views and sightseeing opportunities are exceptional from both riverwalks. There are kayaks, canoes and boats passing by. Birds watching people, people watching birds. The riverwalk system is a great way to explore the waterfront in the City of Winnipeg.

The front yard of the Manitoba Legislative Building looks down the centre of a long strip of green space caught up between Memorial Boulevard and Osborne Street. In the middle, between the two roads, is Memorial Park and a 1918 War Memorial. The park includes a long floral garden, a water fountain pool area with walkways and a statue of the man named Intrepid.

Sir William Stephenson was a Canadian from Manitoba who was a famous war time spy hero who ran by the code name of Intrepid. Some say the Manitoban was the story behind the creation of the movie James Bond. Ian Fleming, the creator of James Bond, once said, "James Bond is a highly romanticized version of a true spy. The real thing is ... William Stephenson."

Manitoba Legislative Building is a grand structure with many unique features. The most popular feature is the Golden Boy figure perched on the top of the golden dome ceiling of the building. The boy is a bronze statue formed in the shape of Mercury who was a Roman God or is it the Greek God Hermes. Hmmm.

On each of the four corners of the golden dome are stone carvings representing agriculture, science, industry and art which are the four elements of alchemy, earth, air, fire and water.

The other impressive feature is the Grand Staircase located inside of the Manitoba Legislative Building near the entrance. The staircase has some superstitions attached to it. The room is a square shape room measuring 66.6 feet by 66.6 feet. This was no fluke ... 666 are the dimensions for a reason. Ask on your visit.

At the entrance of the building are two large bisons designed to protect the building. The bisons are a symbolic symbol to the people of Manitoba. When inside look up at the walls and ceilings near the north and south entrances and see busts like the the head of Medusa and the head of Athena - the Greek Goddess of War.

The Manitoba Legislative Building can be viewed with an interpretive guide or on your own with a good brochure and map. The building is open every day. Check for the hours of operation.

How To Get ToManitoba Legislative Building

:
How to Get Here: Walk or bike to the Manitoba Legislative Building following the Assiniboine Riverwalk on the banks of the Assiniboine River. Follow Portage Avenue (Hwy #1 Trans Canada Highway). At the intersection of Portage and Memorial Boulevard start looking for a parking spot. Walk or drive south on Memorial and you run straight into the legislature grounds.

parliament-building-pic
PreviousNext
No reviews yet for Manitoba Legislative Building.