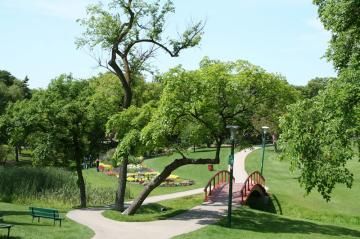 Kildonan Park is an urban community park situated on the banks of the Red River located in the City of Winnipeg, Manitoba, Canada.

The 40 hectare (99 acre) park is home to many beautiful flower gardens, large grass lawns and the site of some of the province's tallest and oldest trees. The main gardens in the park include the South Garden, North Garden and the Rock Garden.

Throughout the park are many day use picnic sites, picnic shelters and BBQs for those special family outings and group functions. Some picnic areas are perched near the Red River while others are tucked away under the cover of trees.

Kildonan Park enjoys 2.7 kilometres of recreation trails. The trails follow the banks of the Red River as well as explore the park. The routes are level, paved and easy going. They are signed with park maps and decorated with sitting benches. Most are wheelchair and baby stroller friendly.

The summer activities most enjoyed in Kildonan Park include birdwatching, walking, jogging, picnicking and rollerblading. On the Red River kayaking and canoeing are popular activities. Located along the banks of the river are sightseeing benches and a public boat dock for launching canoes and kayaks.

During the winter months the park is still a very busy adventure destination. The trails become cross country ski routes. The pond becomes an ice skating surface. And the surrounding hills are used for tobogganing.

The Hansel & Gretel’s “Witch Hut", the Rainbow Stage (Canada's longest running outdoor stage) and the Olympic size pool with change rooms are the main attractions located in Kildonan Park. The actual site of the Hansel & Gretel “Witch Hut" is on the banks of Selkirk Creek which acts as a duck pond and bird feeding area.

Throughout the park are many amenities which attract people to the green space park. There are trails for sightseeing walks. And there are loop roads exploring the park as well. Loop roads in the park include Riverview Drive, Rainbow Drive, Lord Selkirk Drive and Peguis Drive. (Peguis Drive is closed Sunday evenings to traffic)

Some of the other amenities in the park include a wading pool, pavilion, sand volleyball court, bike racks, playground, monuments, sandbox, soccer field, washrooms and a nearby public golf course.

The Kildonan Park is a very colorful park full of scents and beautiful scenery. The floral park is a popular destination for wedding pictures and group functions. Some of the gardens in the park can be rented for photo shoots.

How To Get ToKildonan Park

:
How to Get Here: From Downtown Winnipeg, near City Hall, travel northeast on King Street and then take a right onto James Avenue. From James Avenue take a left onto Main Street. On Main Street, near Armstrong Ave., is the entrance on your right. There is another entrance on Armstrong Avenue as well. Total distance from downtown is 6.5 kilometres.

kildonian-pic
PreviousNext
No reviews yet for Kildonan Park.