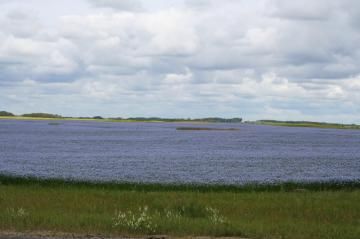 Dauphin Lake is a recreation lake located east of the community of Dauphin in the Parkland Region of Manitoba, Canada.

The lake is a large lake measuring over 200 square kilometres. In 1964 the lake was dammed at Terin's Landing near the mouth of the Mossy River. The dam is a ten bay dam with a concrete stop log mechanism complete with a fish ladder.

The western shore of Dauphin Lake is lined with sandy beaches - some easier to access than others. The easiest beach to access is Rainbow Beach located in the Rainbow Beach Provincial Recreation Park. Other beaches on the lake include Sifton, Stoney Point, Dauphin and Ochre Beaches.

Many activities are enjoyed on Dauphin Lake in the summer months including swimming, canoeing, kayaking, boating, water skiing, windsurfing and fishing. During the winter months one can ice fish and snowmobile on the lake.

Dauphin Lake is a well known fishing destination for many who seek to catch walleye, carp, sauger, white fish, silver bass and northern pike. Boat launches for accessing the lake are located in Rainbow Park.

Some say Dauphin Lake is one of the best lakes for catching trophy walleye in Western Manitoba. For those who like to shore fish there are some great rivers which connect to the laketo cast from like Valley and Wilson Rivers.

For overnight fishing many decide to stay in the campground in Rainbow Park. However if camping is not your style there are accommodations 15 kilometres away in the community of Dauphin.

A note of caution when boating on Dauphin Lake - the lake is notoriously shallow in some areas of the lake, so be aware at all times if you are new to the lake.