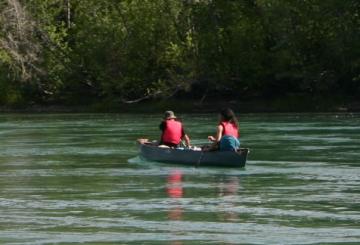 Grass River Provincial Park is a Canadian wilderness nature park popular for adventure and activity located north of the community of The Pas, Manitoba and east of Flin Flon and Cranberry Portage, Manitoba. The park was first established in 1963 and measures about 225,000 hectares.

The Grass River Provincial Park is described as a waterway park with many river and lake systems surrounded by boreal forest, bogs and rocks from the Canadian Shield. The northern section of the park is more reminiscent of the rock outcrops associated with the Canadian Shield... while the southern portion of the park is part of the Manitoba Lowlands.

The wilderness nature park was established to protect a herd of woodland caribou and their breeding grounds, as well as, the sensitive eco systems of the historic Grass River. The caribou access park lakes and their small islands for calving. Some of the lakes like Simonhouse, Reed, Iskwasum and Wedge Lakes are caribou breeding grounds.

During the summer months the activities enjoyed in the park include fishing, canoeing, camping, boating, water skiing, wind surfing, swimming, picnicking, wildlife watching, birdwatching and hiking. And during the winter ice fishing is enjoyed.

The Grass River Provincial Park is best known for the Grass River Canoe Route measuring 570+ kilometres is a highlight feature in the park. The other big draw in the park is the fishing for trout, walleye and whitefish.

The lakes vary depending on your fishing preferences. Loucks, Iskwasum and Elbow lakes are better for fishing walleye. Simonhouse Lake is best for pike. Reed and Secondary Cranberry Lake are best for fishing lake trout. While fishing for rainbow trout is better on Webster and Amphipod Lakes. Some are catch and release lakes.

There are boat launches located near the campgrounds and near the west entrance of the park. Campgrounds include pit toilets, solar heated showers, docks and fish cleaning shelters. For more comfort there are fishing lodges in the park and accommodations nearby.

All three are developed campgrounds located on the Grass River Canoe Route. The only designated hiking trail in the park is near the Iskwasum Campground. It is a 3.2 kilometre return trail called the Karst Spring Trail.

There are other campsites located on the river and lakes in the park and they are called wilderness campsites. These are bare bone camping areas with a fire pit and primitive conditions - often accessed by canoe or boat only. To camp in the backcountry requires registration with the park.

The backcountry of the Grass River Provincial Park is rich with lakes, rivers, islands, beaches and wildlife. One of the more popular ways to sightsee the wilderness areas of the park is by exploring on the historic Grass River Canoe Route. it was once a supply and hunting route used by fur traders and the First Nation people.

The canoe route is a 570-kilometre long network of lakes and rivers that begins at the Simonhouse Lake Campground and follows the Grass River to its confluence with the Nelson River. The route is often referred to as the Grass River Corridor. It is a canoe river route decorated with waterfalls, rapids, fast currents, lakes, petroglyphs and portages.

The Grass River Canoe Route flows in a west-east direction. The main route in the park explores the Cranberry Lakes and the Simonhouse, Iskwasum, Loucks, Flag, Reed and Tramping Lakes.

From Tramping Lake the canoe route continues out of the park connecting to Wekusko, Pakwa, Setting, Philipps Lake, Paint and Split Lakes. And... from Reed Lake - located in the park - there is another canoe route which paddles north out of the park and connects to Morton and File Lakes.

There are many wilderness campsites, serviced campgrounds and put-ins and take-out points located on the rivers and lakes. The Grass River route also connects to other parks including the Wekusko Falls Provincial Park and Paint Lake Provincial Park.

The communities of Cranberry Portage, Flin Flon, The Pas and Snow Lake are the closest communities with services. Some of the services include gas stations, sporting goods stores, accommodations, restaurants, grocery stores, banks and transportation like charter planes, float planes, etc.