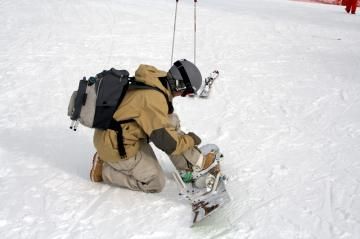 Mount Cain is the smaller recreation mountain on the island, second to the bigger Mt. Washington ski resort. Mt. Cain is rated as one of the best smaller powder ski hills in British Columbia, Canada according to some reports. Ski Canada, recently ranked Mt. Cain as the "5th best in powder ski conditions in Canada". Not too bad for a small locally run ski hill operated by volunteers and open usually, just on weekends.

Mount Cain ski hill first was skied in 1978 by a group of individuals who ventured out onto the West Bowl for the first time. In the 1980's a 700 foot T-bar was built to accommodate the beginning and intermediate skilled skiers. The more challenging ski runs are higher up on the mountain, best accessed by snowmobiles.

In 1986 a second T-bar was built to extend the lifts to 1500 feet accommodating all skiers. Mt. Cain has over 18 ski runs today. The West Bowl of Mount Cain is reserved for cross country skiers and snowshoeing adventurers.

There is a lodge located on Mt. Cain for day use only. A limited selection of accommodations are also available on the hill. There are rental cabins that cater to large groups of skiers sleeping 6-10 people. There are also some privately owned ski chalets for rental and some Hostel accommodations.

Mount Cain gravel roads should not be attempted during the snow seasons unless with a 4x4 vehicle. The gravel logging roads are rough at times and in peak snow season the roads are intermittently plowed so chains would be a very good idea.